[Update: Mayor Murray’s office has responded, saying “While the Waterfront EIS is considering more than one alternative the Mayor is clear his priority is a new waterfront roadway with dedicated transit lanes.”]

Yesterday at the city’s Special Committee on Central Waterfront, Seawall, and Alaskan Way Viaduct Replacement Program,  Office of the Waterfront Director Marshall Foster quietly dropped a bombshell: the city will study the impact of canceling bus-only lanes on the future Alaskan Way.

As a refresher, current plans call for buses to exit SR 99 near the south tunnel portal at Royal Brougham, accessing a reconfigured two-way Columbia Street via dedicated bus lanes on Alaskan Way. Dedicated lanes have long been seen as essential mitigation for the loss of freeway access implied by the Downtown-bypassing Deep Bore Tunnel, so much so that former Governor Gregoire sold the plan as the “tunnel plus transit” plan.

To be clear, the proposal to cancel transit lanes is just one alternative in a new Supplemental Draft EIS.  The option with dedicated transit lanes remains in the EIS and is still on the table. Foster said that community feedback and concerns about pedestrian safety are driving the addition, and that the SDEIS will evaluate the impact of narrowing the street by 24′ by eliminating the the two transit lanes:

“We got a lot of feedback, especially in Pioneer Square…that we needed to look at a narrower Alaskan Way; that especially in the South End that the roadway was too wide. There was a lot of concern about pedestrian ability to cross that street safely and comfortably…based on that, we worked with the State, worked with King County, and the ferries, and we’re going to include an alternative that looks at a narrower Alaskan Way. The key thing that will change is that it will not include dedicated transit lanes south of Yesler.”

Foster specifically cited Feet First, the pedestrian advocacy organization, as a community stakeholder that had suggested removing transit lanes to narrow the roadway. And he’s right. In a September 2013 post Feet First decried the “8-lane highway” planned for Alaskan Way and rallied their supporters to submit comments in support of 3 ideas: overall lane reductions, variable ferry fares to manage demand, and moving the transit lanes elsewhere.

Though many of us in the bike/ped/transit world have shared disappointments about the planned width and channelization of Alaskan Way, including Seattle Bike Blog, any plans to further deprioritize transit on the waterfront would be both a direct bait-and-switch to voters and an operational disaster for bus riders from Burien, White Center, and West Seattle.

Back in 2009 at the press conference announcing the tunnel plans, Mayor Nickels said, “There are pivotal moments when great cities make history. Today, we come together with a plan that creates more transit.” At the same event, County Executive Ron Sims said, “This agreement will…make an historic shift in the way we view mobility in an age of global warming…the plan includes a new stable source of transit funding that will help Metro make a vast increase in service, which will mean fewer cars on the streets.” Today those words ring hollower than ever: the tunnel reduces access to Downtown and complicates any transit pathway, we all know how Metro had to fight tooth and nail to extend the mitigation funding due to Bertha’s delays, and now even the crumbs may be picked up from under the table.

But the bait-and-switch is the past, so let’s think about the future. In a city that just passed Move Seattle on the promise of transit priority, moving away from transit lanes would contravene every goal we’ve established, everything from carbon reduction to Dow Constantine’s hope of integrating our transportation systems to Mayor Murray’s campaign goal of a city of fast, reliable transit via “Rapid Ride+”. Without transit priority on the waterfront, Rapid Ride C and “G” (Delridge) would be sadly devalued.

The idea that bikes, pedestrians, and transit should come first on the waterfront isn’t lofty idealism, but a reflection of data. Today more than half the people on the Alaskan Way Viaduct during peak hours are on transit – doing so in a small fraction of the vehicle space – and Metro has worked hard for years to keep bus lanes in the waterfront plan. And the Draft Environmental Impact Statement has already admitted than pedestrian volume across Alaskan Way will exceed vehicles driving along it. 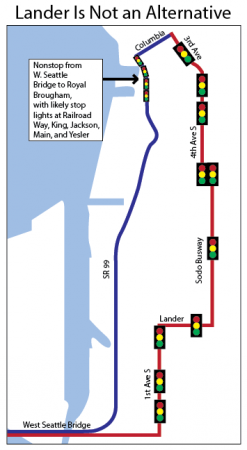 And while ST3 holds out hope of grade-separated rail to West Seattle sometime in the late 2020s or early 2030s, that is no substitute for the very real needs of the 24,000 taking transit in the corridor today, tomorrow, and a decade from now. Suggested alternatives, such as Feet First’s suggestion to use the future Lander Street Overpass to access the Sodo Busway instead, would trade an expressway and arterial transit lanes for 5 extra turns and an extra half mile of travel on every bus trip.

The 24,000 daily transit riders on the Waterfront deserve transit priority: they’re already losing their highway due to Bertha, let’s not let them lose their street too. Now would be a great time to show your support for waterfront transit lanes by emailing local officials, and by submitting comments to the SDEIS as it develops.

108 Replies to “Waterfront Bus Lanes May Be Endangered”