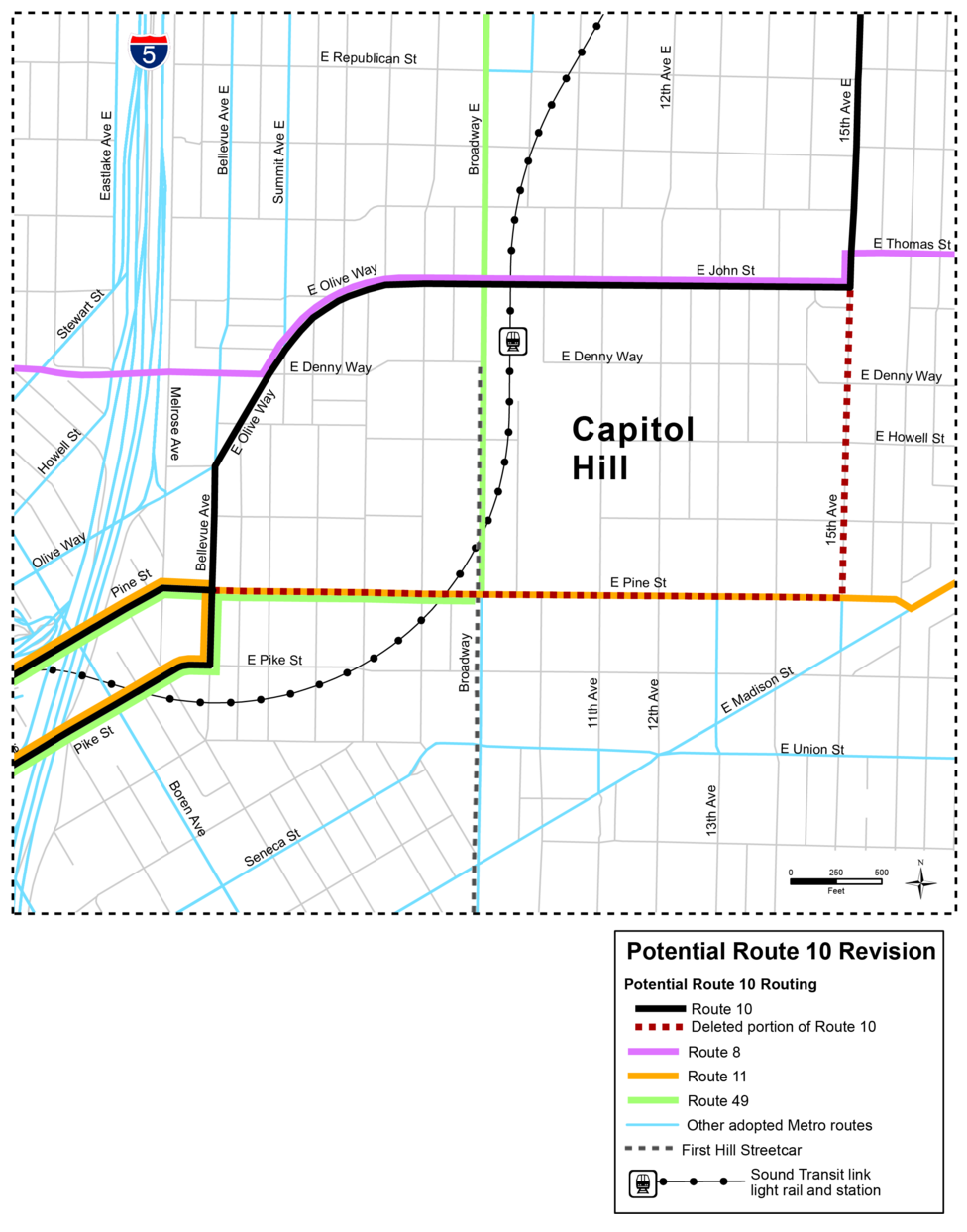 Last week on the blog, David wrote about the merits of this idea, hailing it as an ‘administrative’, zero-cost change Metro could make to atone for the lost connectivity caused by the deletion of the off-peak Route 43 and the failure to move Route 11. Though it does little to help between those losing key frequency east of 15th Avenue, the proposal would do a number of good things:

Current ridership data also supports this change. Between Bellevue Avenue and 15th Avenue, Route 43 has double the daily ridership (2,240) compared to Route 10 (1,170). The stop furthest from either John or Pine, at 15th/Howell, currently sees 150 boardings per day. If adopted, those riders will have either a maximum 2-block walk to frequent service on Routes 8/10/11 or a 5-block walk to the south entrance of Capitol Hill Station at Nagle/Denny.

Metro is seeking feedback for six days only, given the need to having everything nailed down before the Christmas holiday. Please take their short 3-question survey and let them know your thoughts.

Full text of Metro’s blog post reprinted after the jump.

The King County Council has approved bus service changes for March 2016 that will integrate Metro buses with new Link light rail service to Capitol Hill and the University of Washington. The adopted changes will make transit service more frequent and reliable, create new connections, and improve mobility for thousands of King County residents. Find details of adopted changes on our project website.

Metro is working with the Seattle Department of Transportation (SDOT) and other partners to make sure these changes will be successful. SDOT has agreed to make roadway modifications and other improvements in eight places, but declined to make modifications that would support our approved changes for routes 8 and 11 on Capitol Hill and in the Central Area.

We were planning to revise routes 8 and 11 to operate on E Madison Street and 19th Avenue E, continuing to/from E John Street. The purpose of these changes was to keep frequent east-west service that connects with light rail at the new Capitol Hill Station, to improve transfers with Route 48 at 23rd Avenue E, to maintain service on all parts of E Madison Street, and to serve Route 43 riders after that route becomes a peak-only route.

Metro tested the turns with buses, and our traffic engineers developed a traffic rechannelization plan, which SDOT rejected. So we’ll keep routes 8 and 11 on their current paths, resulting in a gap in frequency for riders along this pathway as well as much less bus service to downtown Seattle for the Summit neighborhood (service that would have been provided by our adopted changes to Route 11).

One solution to this gap is to improve frequency on Route 8 above the levels originally approved by the County Council, to partly replace the planned combined frequency of routes 8 and 11 on E John and E Thomas streets. We will be increasing Route 8 frequency from every 30 minutes to every 20 minutes on weekdays and Saturdays between 8 p.m. and 10 p.m., and on Sundays between noon and 7 p.m.

We’re are also considering moving Route 10 to serve E John Street, the Capitol Hill Station, and Olive Way (the same pathway that Route 43 takes today). We did consider this idea during earlier phases of the planning process, including with our inter-agency partners and our Sounding Board, but never brought it to the broader public for feedback. Now that network conditions have changed, we believe it could allow us to better serve Capitol Hill riders.

Please tell us what you think about this idea to change Route 10 via a short survey. The deadline for comment is this Sunday, Dec. 13. Your input will help us more fully understand the implications of this change and decide whether to move forward with it.

Find details of what King County Council adopted on our project website. Stay informed as decisions are made and new information becomes available: sign up for our project email list.