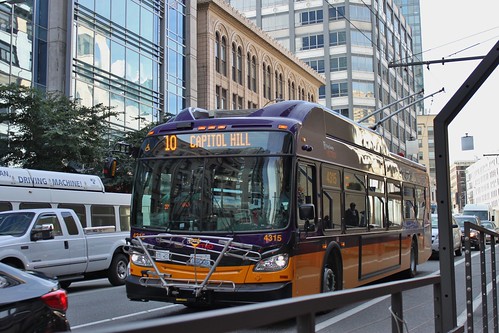 By now, everyone is familiar with our dismay over the lack of a meaningful Link restructure in Capitol Hill, and in particular over some of the major losses that Metro’s final restructure package is imposing without much countervailing benefit.

Arguably the worst loss in service is to the Summit neighborhood, one of the city’s densest. Summit is currently served by two frequent routes running along Olive Way: route 43 to downtown and Capitol Hill, and route 8 to Uptown and Capitol Hill. (There is also the vestigial, infrequent 47 to downtown.) Today, each of the 8 and 43 has 4 buses/hour during the day. The restructure adopted by the County Council slightly increased frequency on the 8 to 5 buses/hour, and cut the 43 altogether except for peak-hour, half-hourly service.  In the ordinance, the lost service on the 43 was fully replaced by route 11, moved from Pine Street to Olive Way and John Street through Capitol Hill. But now, route 11 has been moved back to Pine without any other change, leaving no replacement for the 43, and almost no downtown service, for Summit residents.

The story of why the 11 ended up back on Pine is political, convoluted and not worth rehashing here. But the good news is there is an easy, and still-possible, way for Metro to salvage Summit service.

Metro should move route 10 from Pine to Olive and John.

Together with Link, this would fully replace current 43 and planned 11 service for Summit residents. In addition to making Summit whole, the move would make a new connection between one of Capitol Hill’s major business districts and Link, and meaningfully improve east-west service from Link generally. It would not significantly reduce transit access for anyone or make any common trips significantly more difficult. For Pine riders, frequent service would remain along Pine, on routes 11 and 49. Riders on 15th south of John would have no more than a three-block walk, on flat terrain, to either the revised 10 or the now-frequent 11 or 12.

Legally, this change could be accomplished as an administrative change, not subject to County Council approval, because no part of the route would move more than 1/2 mile. Practically, the could be done with the same resources as currently planned for route 10 and with almost no change to existing schedules. The outbound trip time using Olive and John is 1 to 2 minutes slower at some times of day than the outbound trip time using Pine, but current recovery time is sufficient to absorb those additional minutes.

Metro should make this happen. It’s easy and would make things better. Please let Metro know by calling (206) 553-3000 or submitting an online comment.

Statement from Metro Deputy G.M. Victor Obeso: “Changing the path of Route 10 is an idea we are actively considering, based on constructive feedback and in light of Route 11 remaining on Pine Street. Moving Route 10 off of 15th Avenue East to carry riders along East John Street past Capitol Hill Station is a concept Metro planners examined during the Link Connections effort. Our focus continues to be on serving our customers with the connections they want and need, and work to balance community support and concerns as we consider changes to bus service.”