There are two open houses tonight for those of you interested in transit advocacy, one in Eastlake and the other in the Rainier Valley.

Roosevelt-Downtown HCT
The Roosevelt-Downtown High Capacity Transit project will hold an open house tonight from 6-8pm in the TOPS School Cafeteria in Eastlake, in advance of identifying a Recommended Corridor Concept in early 2016. The plan could include dedicated transit lanes, protected bike lanes, both, or neither, all dependent on community feedback and neighborhood negotiation. Given Eastlake’s vocal neighborhood residents and the natural constraints of the corridor, there are likely to be intense debates about the tradeoffs and relative priority of cars, buses, bikes, and parking. For the bike advocacy perspective, see Seattle Bike Blog, Cascade’s, or Seattle Neighborhood Greenways views. And if you can’t make it tonight, there’s another meeting in the UDistrict Thursday. 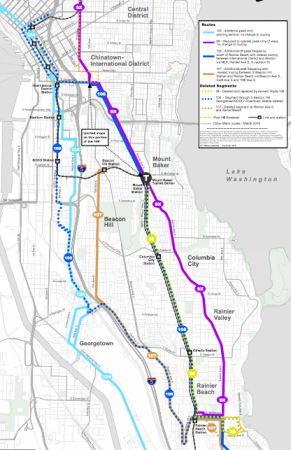 SE Seattle Restructure
Metro will hold a meeting on the proposed restructure of Routes 8, 9, 106, 107, and 124 Wednesday evening at the Filipino Community Center. The proposal would combine Route 38 (south half of Route 8) and Route 106 to form a frequent all-day connection between Renton, Skyway, and the Rainier Valley, a meritorious idea that we’ve supported since it was first proposed in a service cut scenario in 2012. Unfortunately, the proposal also halves Downtown-Georgetown service and adds a duplicative 4th route between Mount Baker and the International District. We’d encourage attendees to listen to the planners and the community at this open house with an open mind, while also asking hard questions of staff. Suggested questions to ask: