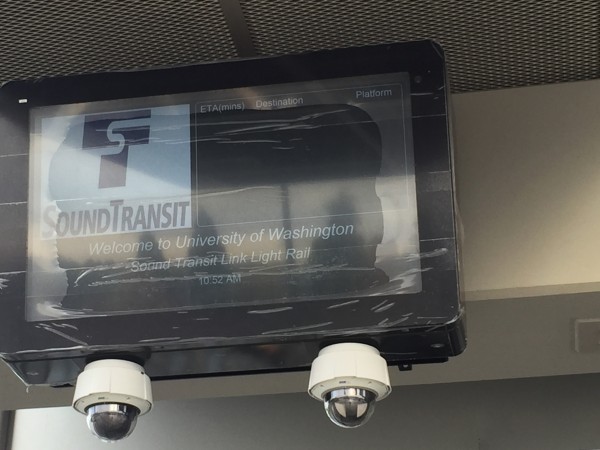 The two new U Link stations will introduce a new way of delivering information to passengers but the design needs to be more user-friendly. Unlike the LED signs at Link stations today, the new stations use flat panel screens. When I went by UW Station last month, I was not impressed with the test screens I saw. Sound Transit told me and a few other concerned people on Twitter stating that the screens I saw were not the final look. While I await their final design, I would like to critique the test screen and suggest improvements.

The test screen’s layout is divided in three parts: an area for images like a distorted Sound Transit logo; an area for showing train arrival times; and an area below the two spanning the width of the screen showing the familiar text seen on signs at other Link stations, “Welcome to [station name] / Sound Transit Link Light Rail / [current time]”.

The biggest problem with the design is it attempts to cram too much information on a single screen, resulting in text much smaller than the signs they replaced. The most important information on the screen, the train times, is given a third of the space with very small text that is difficult to read from a distance or while walking. Two-thirds of the screen is dedicated to irrelevant information like the Sound Transit logo and the welcome message. Such information belongs on permanent station signage, not a dynamic screen like this.

By breaking that information into multiple screens each focused on a single message, readability would be greatly improved. An example of this are LA Metro’s station information displays. Prior to their redesign a few years ago, LA’s signs tried to do what ST did with a three section layout. There was a running ticker in the bottom for service alerts, a large area for more alerts, graphical marketing & public service announcements, and a small column to the left for next train times.

The new design gives each element its own screen for a few seconds at a time. This allows the layout of each screen to be tailored for the message. Service alerts are given a bright yellow and bold text to call attention. Eye catching, full-screen graphics can be used for marketing and public service announcements. Train times can be shown in large text that can be seen from afar. Even the date and time has its own screen. Each screen can be given a different weight so some screens stay up longer or show more frequently than others or in the case of an emergency, normal programming can be overridden to give important messages.

The other design aspect I like about LA’s screens is they fit in with the LA Metro look. The typography, colors, and symbology match those used in Metro’s branding and wayfinding system to make it a consistent experience across all mediums, static and dynamic. While the approach shown is not the only way to design a passenger information screen it is clearly better than the test screens I saw.

48 Replies to “Suggestions for U Link’s Station Screens”