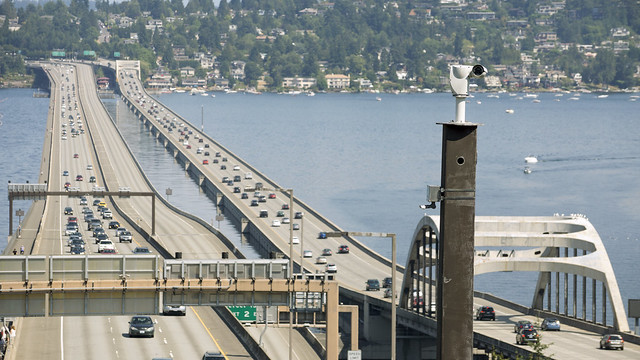 Many Metro and Sound Transit routes use I-90 between the Eastside and downtown. Sound Transit routes 550 and 554 and Metro routes 212 through 219 together total almost 20,000 riders daily. In less than 18 months, the ride to Seattle will change significantly during the East Link construction process. And of course, that’s just the beginning: I-90 buses will have even bigger changes when East Link opens in 2023.

Right now, I-90 buses from the Eastside have HOV 2+ or Express lanes for the entire length of I-90 in the peak direction, and HOV 2+ east of Mercer Island contra-peak. Then buses either proceed into the transit-only tunnel, or go on surface streets like 2nd/4th and 3rd (which is transit-only during peak). In June of 2017, the express lanes close to cars and buses move to new HOV lanes from Bellevue to Rainier Avenue*. In a relatively new development, all agencies involved have agreed to keep the D-2 roadway (which is west of Rainier) open to buses until 2018, allowing them to still flow unimpeded into downtown.

There is a plan to mitigate likely additional delays, as shown above:

According to Sound Transit projections, the net effect is 5-8 extra minutes on every PM bus trip  westbound, but no measurable impact on peak AM westbound buses or any Eastbound trips.  I’m skeptical about how that’s possible; I drive the HOV lanes of I-90 every morning and the space between the tunnel and the 4th ave exit seems like a big opportunity for a bottleneck with no transit priority in the AM Peak. The 554 reroute to Rainier and then Jackson also will be slow. According to OneBusAway, the Route 7 trip from Rainier & I-90 to 3rd and Pike (1.5 miles) takes about 18 minutes in peak, vs. about 11 minutes for the 550 and 13 for surface buses.**

This comes at a critical 5 year period for Seattle to Bellevue transit: Metro and ST need to build ridership in anticipation of East Link, and slower buses won’t help. In fairness, though, cars aren’t going to be moving that fast either. Here are some more radical changes that would increase reliability and speed on this corridor:

I-90 Commuters: what changes would you make on this corridor during East Link Construction?

* Only the segment from Mercer Island to Seattle is new.

** Obviously, traffic diversion due to all the changes, and fewer stops and boardings than the 7, may impact these estimates. On the other hand, the 7’s scheduled times are not entirely realistic.