The machine had been stalled since December 28th near 47th & Brooklyn, roughly 650′ north of the future UDistrict Station, but Sound Transit restarted Pamela yesterday and was able to advance enough to fix one concrete ring. Pamela’s sister machine Brenda also struggled through the hard glacial till of the UDistrict, needing cutterhead repairs before continuing on to UW Station, but Pamela’s damage has been revealed to be much more severe. Meanwhile, Brenda is cruising along, entering UW property last week and is currently underneath Kane Hall nearly halfway between UDistrict Station and UW Station. (see graphic at right).

Sound Transit’s primary plan is to try to coddle Pamela but keep the machine in use – using lower torque and mining only about 10′ per day – taking 2 months to bore the final 650′ into UDistrict Station, which will serve as a makeshift repair site before continuing south to UW Station.

While these developments are worrying, it absolutely cannot be stressed enough how this situation differs from any tempting comparison to Bertha and the waterfront tunnel project, both in structural characteristics and in responsible project management. 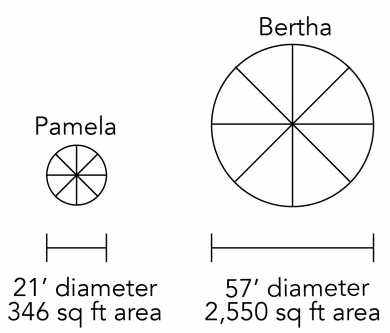 First and foremost, Pamela and Brenda (and Balto and Togo before them) are standard machines the likes of which are used all over the world, unlike the precedent-busting, one-of-a-kind, 2,500 sq ft beast that is Bertha. If Pamela fails completely, Sound Transit can refurbish Brenda to complete the 2nd bore from UDistrict to UW,  and “Sequential Excavation Mining” would likely be used to reach Pamela. In a bit of great project management that stands in stark contrast to Bertha, Sound Transit’s contract also required a 3rd TBM be available for backup.

It should also be repeatedly stressed that this is the first major setback since the Beacon Hill tunnel for Central Link. In the combined 14 miles of tunneling for ULink and North Link, Sound Transit has already mined roughly 12 miles without a hitch until Pamela’s troubles. When it comes to Bertha, we talk in feet instead of miles.

Because of this foresight and planned redundancy, Fazel stressed to the committee that even a tunneling delay is 3-8 months is not estimated to impact overall deliverables, and that Northgate Link is still estimated to be on time and on budget. Current costs are running roughly ~$100m below the 2016 budget, giving Sound Transit breathing room for contingencies and repairs.

66 Replies to “Pamela Stalls, But She’s No Bertha”