Back in 2012 I wrote a skeptical piece about the prospects for Pronto (née Puget Sound Bike Share) in Seattle. I saw our dearth of safe bicycle facilities and rare all-ages helmet law, alongside the traditional complaints of hills and weather, as potentially fatal to the confident spontaneity that drives bikeshare ridership. Though some of my fears proved unfounded – Pronto safety hasn’t been an issue – other even greater problems have depressed ridership and revenue and led to an early crisis and possible demise. Absent a city buyout, Pronto risks shutting down on March 31.

The Sustainability and Transportation Committee will vote tomorrow (Tuesday, 3/1)  on whether to proceed with a $1.4m buyout of the system. The proposal before the Council would purchase Pronto’s privately-held capital assets, namely the remaining 26 stations it doesn’t already own, maintenance and fleet rebalancing equipment, helmet vending equipment, etc. The City would retain the current contract operator (Motivate) for the remainder of 2016, and then restructure the system for relaunch and significant expansion in 2017. The $1.4m would incur no new costs, but rather incur lost opportunity costs by transferring 28% of the $5m already allocated in the City’s budget for bikeshare expansion. Failing to purchase the system would also trigger repayment of a $1.0m FTA grant, so the net outlay here is $400,000, or roughly what King County Metro spends every 2.5 hours.

If you believe, as I do, that Pronto’s problems lie in its execution rather than any systemic inability for Seattle to embrace bikeshare, then saving it is an essential first step toward building the successful system we know is possible. If you believe in Pronto’s ultimate success, shutting the system down only to inevitably relaunch at a later date at much greater cost would be incredibly foolish. If you agree, please let your committee members (O’Brien, Johnson, Sawant, and Herbold) hear from you today.

My Top 5 ways to fix Pronto after the jump.

Once saved, we can all begin the sober assessments of Pronto’s shortcomings and work together to fix them. Here are my top 5.

Beyond its obvious recreational value, bikeshare works best as “first/last mile” transit. Yet one of the primary shortcomings of Pronto’s initial rollout has been our collective inability to aggressively site Pronto stations directly adjacent to transit facilities, with not a single Pronto station directly serving Link. Consider: At Westlake, the closest stations are at McGraw Square or at 9th/Pine. At University Street, we lost our only direct Pronto-Link connection due to complaints from the Garden of Remembrance Board. At Pioneer Square, the nearest stations are at City Hall and Occidental Park. At International District, the station is hidden from view on 6th Avenue South at King Street, or nearby at the least-used entrance to King Street Station. At the brand-new UW Station, the expansive station plaza won’t see a station, with Pronto users walking to UW Medical Center instead.

While none of these are terribly long walks, that’s not the point. Bikeshare rewards the lazy and the spontaneous, not the die-hards in the know about the stations’ whereabouts.

In addition to interagency complexities and difficulties negotiating with property owners, the city has made several unforced errors within its own departments. Our inability to place stations on city-owned facilities such as Westlake Park or Seattle Public Library is disappointing to say the least.

Public ownership would remove private contractors as the primary negotiators, and give the city both more authority and greater responsibility for siting stations in closer proximity to transit.

Bikeshare networks depend on station density. Best for short point-to-point rides, it is absolutely critical to minimize out-of-direction travel to return a bike. Tom from Seattle Bike Blog has already done some great analysis on station density, and I won’t repeat his good work. Go read it.

But even station density is a crude metric. Imagine two hypothetical networks, each with 16 stations. One is a 4×4 square and the other a 1×16 rectangle. Both networks have a density of 1 station per unit of area, but the 4×4 network is far more useful. Why? Because every station needs to be as near as possible to every other station. Linearity is the enemy of useful bikeshare, and contiguity is its best friend.

Since a circle has the lowest perimeter to area ratio (PAR) of any shape –it’s the most efficient use of contiguous space – one way to comparatively quantify the inefficiency of a bikeshare network is to calculate its PAR.   In the image below, I calculated the area of the current Pronto network (4.38 sq miles), then drew 3 shapes of identical areas: a perfect circle, a perfect street grid, and a contiguous network centered on Westlake Station. 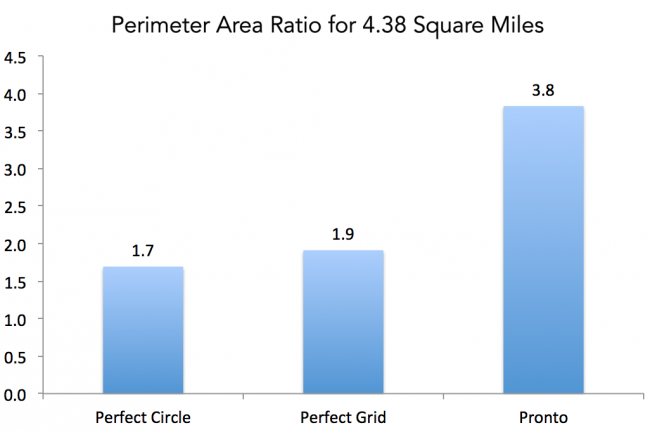 Looking at the map and chart you’d expect the peripheral UDistrict stations to underperform, and indeed they do, at .3 trips/bike/day, compared to 1 trip/bike/day for the core stations. By contrast, D.C.’s Capital Bikeshare has 5 trips/bike/day.

Yet fixing this isn’t easy – the UDistrict stations were written into the system’s founding grants – and the expansion process will raise familiar and difficult transit planning questions. Namely, how do we balance the tensions between system performance, system access, and social justice? SDOT’s current draft expansion map would quintuple the service area to 25 square miles, but it would also double down on linearity. It would serve a network from Northgate to Rainier Beach very loosely aligned with Link, while leaving out bikeable places such as Ballard, Frelard, and Interbay. It would provide affordable and needed transportation in places like the Rainier Valley, but it would also undoubtedly drag down the system’s financial performance and ridership. If we build that system for reasons other than performance, that’s acceptable, but let’s not later hold its inevitable underperformance against it. 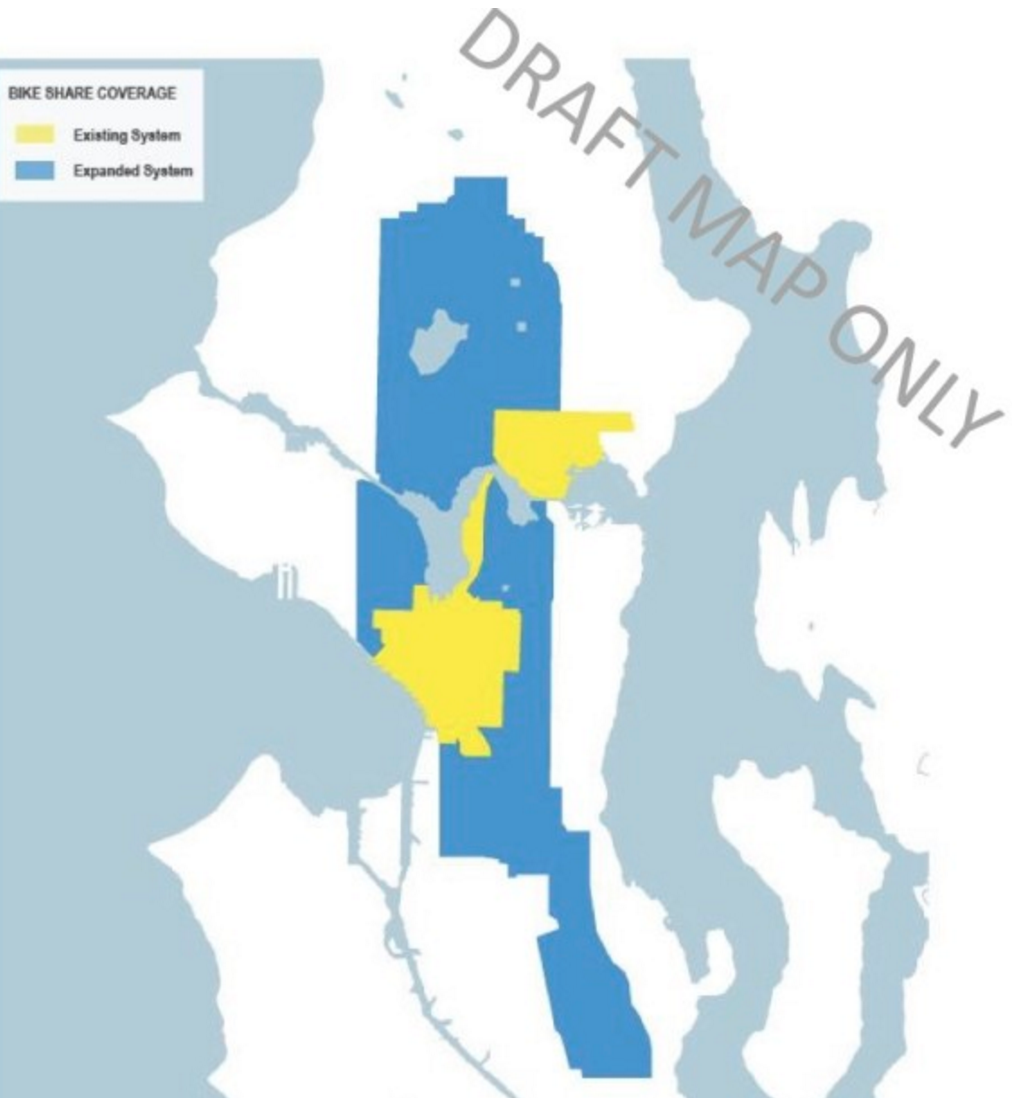 Though controversial within the cycling community and a guarantee of a comment flame war, there is simply no doubting the empirical reality that our rare all-ages helmet law adds a barrier to ridership and drags down performance. Seattle may have its dangers, but if Manhattan can be safe for millions without a helmet law, so can Seattle.

Again, if we value mandatory helmets over spontaneous ridership, that is a value choice we are free to make, but then we similarly must reduce our ridership expectations. Personally, I’ve come to see helmets as a psychological barrier that mark cycling as dangerous sport, and I prefer to work toward a world in which you would no more don special clothing to ride a bike than you would to drive your car.

King County is the only county in Washington with an all-ages helmet law, but you can still encourage their use while not requiring them. I hope we could follow the lead of cities like Dallas, who reduced their helmet law to minors only prior to their bikeshare launch. Doing so would boost ridership and lower Pronto’s overhead without impacting user safety.

Car2Go rents by the minute, Zipcar by the hour, but Pronto starts with a day. Pronto’s $8 per day minimum is a large barrier to use, especially for one or two trips, and especially for price-sensitive riders. Yet the annual fee ($85) is also likely too low to adequately recoup costs (my 118 trips so far have cost me $1.44 each). Though Pronto followed many cities’ lead in adopting this pricing structure, adding minute or hour pricing and raising the 30-minute ride threshold would greatly incentivize occasional use. Under the current structure, daily users excessively subsidize annual members.

We have an exciting and ambitious Bike Master Plan to add bike routes throughout the city, and we also have a political mandate to build them via Move Seattle. So what’s holding us back from building the Center City Bike Network, or from ensuring quality bike facilities everywhere within Pronto’s service area? Let’s all work together and get on it!

96 Replies to “Save Pronto, Then Make It Work Better as Transit”