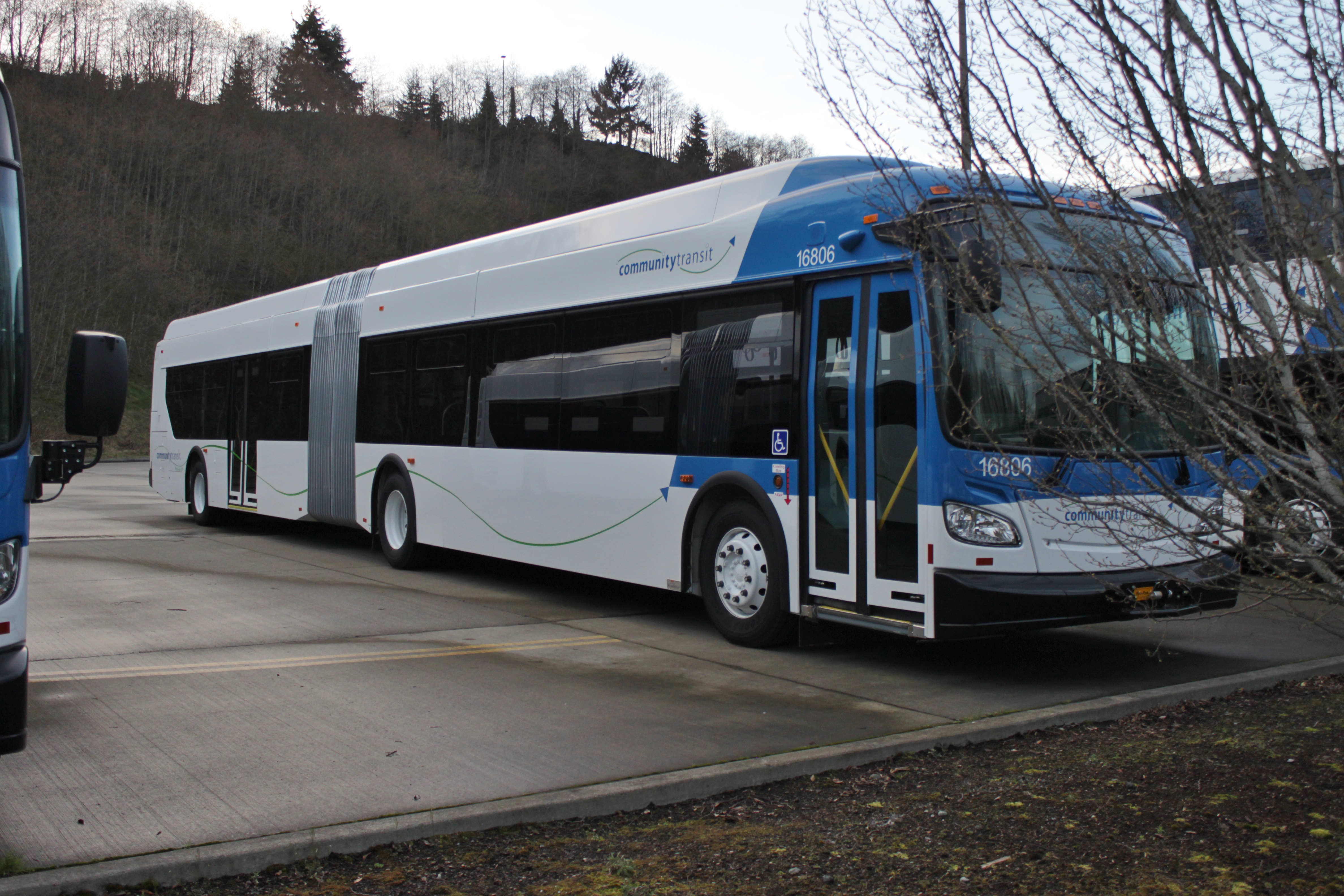 At its monthly board meeting held earlier this Thursday, Community Transit unveiled its proposals for its first Proposition 1-funded service expansions, scheduled for September 2016 and March 2017. The two expansions add about 38,300 hours of service, fulfilling the promise of transit service on the State Route 9 corridor (in the form of two new routes) and adding incremental improvements to existing routes throughout the system. CT states that this expansion will add 14% more service over 2015 levels and will be part of a gradual increase of 40% more service to be achieved by 2021.

The new routes, coming in September, form the backbone of service on State Route 9, a major north-south corridor serving the eastern parts of the county. Route 109 runs from Ash Way Park and Ride along Ash Way, 128th/132nd Street in Mill Creek, Catchcart Way, through Downtown Snohomish on Avenue D, to Lake Stevens Transit Center. Route 209 runs from Lake Stevens Transit Center north along Highway 9 to 64th Street, turning west and continuing through Downtown Marysville and under Interstate 5, and north on 27th Avenue to Quil Ceda Village, ending near the Tulalip Casino and Seattle Premium Outlets mall; route 209 roughly follows the former route 221, which was cut in June 2010. Both routes will have 30-minute frequencies during weekday peak and 60-minute frequencies midday on weekdays, and all day on weekends. Community Transit planners stated that the two routes were split to increase reliability and to prevent overworking drivers on what would be one of the longest local routes in the system.

To complement the addition of route 209 through Marysville, existing route 222 (Tulalip to Marysville via Quil Ceda), will be rerouted through the eastern half of the city. Instead of turning south on 67th Avenue, buses will continue east on Ingraham Boulevard to serve Marysville Getchell High School and turn south on 83rd Avenue NE. From there, buses make another turn at the city’s Walmart store onto 64th Street, sharing stops with route 209, before turning north on 67th Avenue and west onto Grove Street, passing by the city’s library, and terminating at State Avenue (where it meets routes 201 and 202) near the Marysville Cedar & Grove Park & Ride. The change was spurred mainly by the introduction of route 209 service on the 64th Street and 4th Street corridor, allowing for that tail to be eliminated in favor of restoring service to Grove Street and the city library; as a result of these changes, a short 0.7-mile section of 67th Avenue will lose all of its transit service, but was determined by CT planners to be a low-preforming section of route 222 and well within reasonable walking distance to the new stops.

Seattle commuter routes will also see small improvements in the September service change. Route 417 (Mukilteo) will now skip the Lynnwood Transit Center, opting to stay on Interstate 5 and State Route 525 instead of taking a slow diversion through the transit center and city streets. Other routes will receive additional trips, mostly southbound in the AM peak, as well as trip time adjustments to increase reliability and schedule accuracy.

The March change is all about improving the existing network. Some 6,300 hours of service will be added to 9 routes, including Swift and other core services. Most routes will receive new trips that extend evening service further into the night, varying between 30 minutes to an hour.

The largest portion of the March service change is the addition of several new midday trips on weekdays for routes 119 and 120. 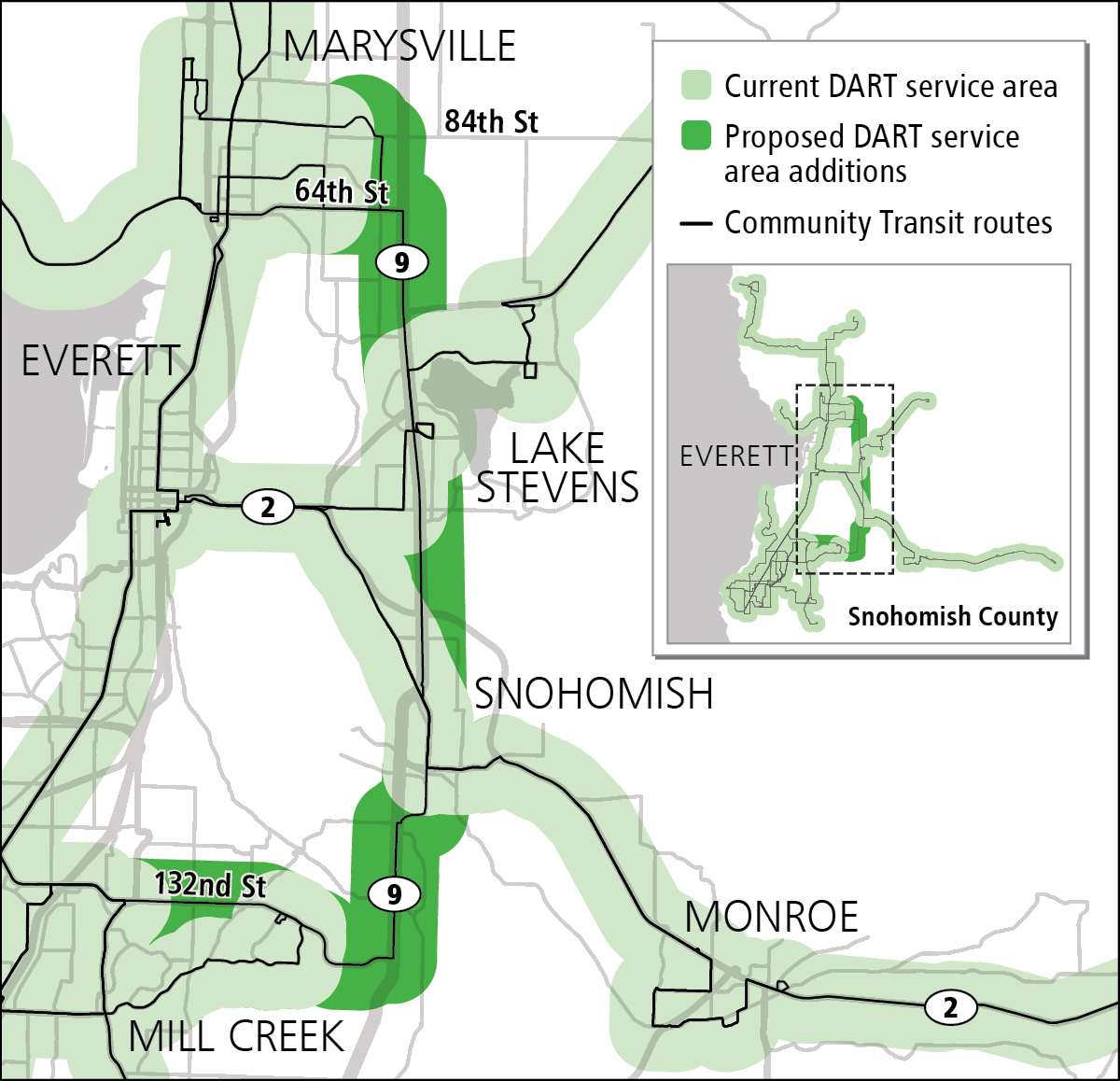 With the introduction of new service on State Route 9, dial-a-ride (DART) paratransit service will be expanded along routes 109 and 209 in Mill Creek, Snohomish, Lake Stevens, and eastern Marysville.

Community Transit is taking public comments on this proposal between now and April 8 via a dedicated e-mail address (newservice@commtrans.org), or via its phone line (425-353-RIDE) and regular mail. Four public events will be held the week of March 22 to 24 and March 30 at locations in Marysville, Everett and Lynnwood. A public hearing will be held at the next Community Transit Board meeting, to take place on April 7 at 3 p.m. at the agency’s Merrill Creek headquarters in Everett.