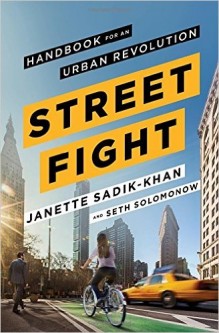 Former New York City Transportation Commissioner Janette Sadik-Khan’s Street Fight: Handbook for an Urban Revolution isn’t quite in STB’s wheelhouse. As New York City has a mature transit system, and not under her supervision, the emphasis of her work (and the book) is on street design rather than transit architecture. And yet, the story of the movement that spawned initiatives like Vision Zero is a good read with lessons for Seattle and elsewhere.

The book serves three basic purposes. First, it makes the argument for what we usually call “urbanism:” density and de-emphasis on fast-moving cars. As most readers will already be convinced, this thankfully gets the least treatment. Indeed, while someone like me finds little to quarrel with, committed car advocates will find many arguments unconvincing. The argument that “increasing the supply of road space doesn’t alleviate traffic; it almost always allows more people to drive more” sounds dystopian to someone conscious of the externalities of driving. For others, it just shows how badly more road space is needed.

The second purpose of the book is to serve as an accessible manual for how to build a street. Many of the concepts will be familiar to fans of STB and similar blogs, but it’s pleasant to see it coherently presented in one place. There’s a fine discussion of lane narrowing, a technique that hasn’t gotten much press here.  A tool that Seattle has barely touched is one-way streets. In places where the right-of-way is quite narrow given the purposes we allocate to it, converting a street to one-way immediately halves the space the city has to dedicate to cars, allowing other uses without creating 100-foot-wide monstrosities. I’d like to see Seattle look at more places it can recover street space with one-way traffic, as it’s considered near Mount Baker Station.

The chapter on bike share is of particular contemporary interest. Her list of tips for successful bike share is a list of things Seattle didn’t do: avoid helmet laws, pack stations densely, and start with a big system instead of a limited one. Interestingly, a key success for CitiBike was structuring it as a revenue contract, so that each bike station placement wouldn’t become a heavily politicized land-use process. One wonders if Seattle’s proposed takeover of Pronto will create those kinds of problems.

The final, and most appealing, purpose of the book is to provide a political strategy for change through anecdotes about the fights in New York. This portion really could have a used a chapter to distill the lessons Ms. Sadik-Khan learned into a coherent blueprint. She is also not very reflective about the one big failure of the Bloomberg era, congestion pricing, content to blame the legislature and move on rather than dissect what the city might have done differently. Nevertheless, a careful reading reveals some insights, many of which surpass statements of the obvious:

It’s an open question just how much of the New York game plan can apply to Seattle. The city already had a good rail skeleton, there are few single-family neighborhoods to defend, and with only 6.6% of Manhattan commuters driving alone, the car constituency is not as strong. However, it’s clear that the Murray administration has studied at least part of the playbook, and this book is a useful tool for understanding what SDOT is up to.

Ms. Sadik-Khan will appear at Town Hall on March 21st at 7:30pm, “in conversation with” Mayor Ed Murray.  In her book, she both criticizes (the Deep Bore Tunnel) and praises (Move Seattle) initiatives connected with the Mayor.

15 Replies to “A Field Manual for Renewed Streets”