On Saturday I wrote about conflict between the City of Kirkland and Sound Transit on proposed transit investments in Sound Transit 3. If you’re new to this issue I suggest you read that piece before this one, but to reiterate, the basic issues are as follows. Kirkland developed a detailed Bus Rapid Transit plan for its Cross Kirkland Corridor in response to two perceived limitations of light rail, namely that a small capital package would render light rail unaffordable and that light rail was inappropriate for a rail-trail corridor that misses the heart of downtown Kirkland. The City and Sound Transit are at an impasse on the project, with Sound Transit preferring light rail given the likelihood of a larger package and because the preponderance of public comment strongly favored light rail over BRT. Kirkland has remained steadfast despite these new realities, threatening to publicly oppose the ballot measure (pages 12-13) if light rail is included. Meanwhile, citizen activism via the Save Our Trail group threatens any transit investment in the corridor, which in turn threatens the strength of Eastside projects needed to deliver a ‘yes’ vote on Sound Transit 3.

What follows is an attempt at a third way, a grand bargain that builds an appropriately scaled intra-Eastside rail line that is likelier to motivate voters, that permanently secures a world-class walking and biking trail from Woodinville to Renton, and that responds to both the concerns of the City of Kirkland and the adjacent homeowners of Save Our Trail. The following proposal isn’t perfect, but I believe it’s a good-faith triangulation of competing needs that builds a quality project while offering substantive mitigation to Kirkland residents. The proposal is in 5 parts:

1. Build a transit greenway. In trail-like settings, there is a clear aesthetic advantage to light rail. Even the quietest electric trolley buses would require at least 30′ of concrete adjacent to the trail, whereas light rail could be built in a much subtler way, with rails embedded with grass as in done in much of the world (see photo above). Admittedly, Sound Transit has built nothing remotely like this to date, but there is nothing precluding such an investment. Where sightlines are good, pedestrians could be permitted to cross freely, a major sticking point of the Save Our Trail group. Near curves, barriers, fencing, and minimum-footprint overpasses could be installed.

2. Give up on Totem Lake rail. Though historic rail right-of-way is always alluring, in low density areas it is admittedly inappropriate for high capacity transit. I propose to build rail on the Cross Kirkland Corridor only where it happens to be on the way between two major Eastside destinations. Between Bellevue and Kirkland, the Cross-Kirkland Corridor is a relatively direct connection that just so happens to be pre-existing right of way, whereas a Central Kirkland-Totem Lake line would be a solution in search of a problem, with a low density corridor marked by warehouses, second-growth woods, and other transit-hostile uses. We should build rail to Downtown Kirkland only, and allow high quality I-405 BRT to serve Totem Lake, as befits its freeway oriented character.

3. Use Totem Lake’s savings to build to Downtown Kirkland, either at-grade or preferably in a short tunnel. From just north of the Google campus, the line should turn northwest to a short terminal station in Downtown Kirkland. We could build a short 0.6 mile tunnel (the same length as Downtown Bellevue’s tunnel) to a terminal station, perhaps replacing the surface parking lot at Central Way and Lake Street.

4. Split East Link into two lines, halve the frequency, and run a new Issaquah line to Redmond. Hear me out. Kirkland and Issaquah would be relatively weak tails in a light rail network, but splitting the service could allow us to retain core frequency without over-serving either city. Imagine two lines crossing the I-90 bridge, each running every 12 minutes. East Link continues onto Downtown Redmond, while Kirkland Link runs along the same alignment before heading north from Wilburton to Downtown Kirkland. Meanwhile, the Issaquah line runs crosses I-405 at East Main and runs through Downtown Bellevue to Redmond, supplying the Bellevue-Redmond frequency lost by splitting East Link.

The end result is a nicely elegant service pattern (see map below) that serves Kirkland and Issaquah, avoids the apparently untouchable Mercer Slough, but also retains Seattle-Bellevue service every 6 minutes, 10 trains per hour between Bellevue-Redmond, and 15 trains per hour between East Main and Wilburton. Even better, this system would cut costs by requiring 4 fewer miles of overall track, both by omitting Totem Lake and by omitting the redundant stretch of track between East Main and Wilburton east of I-405. 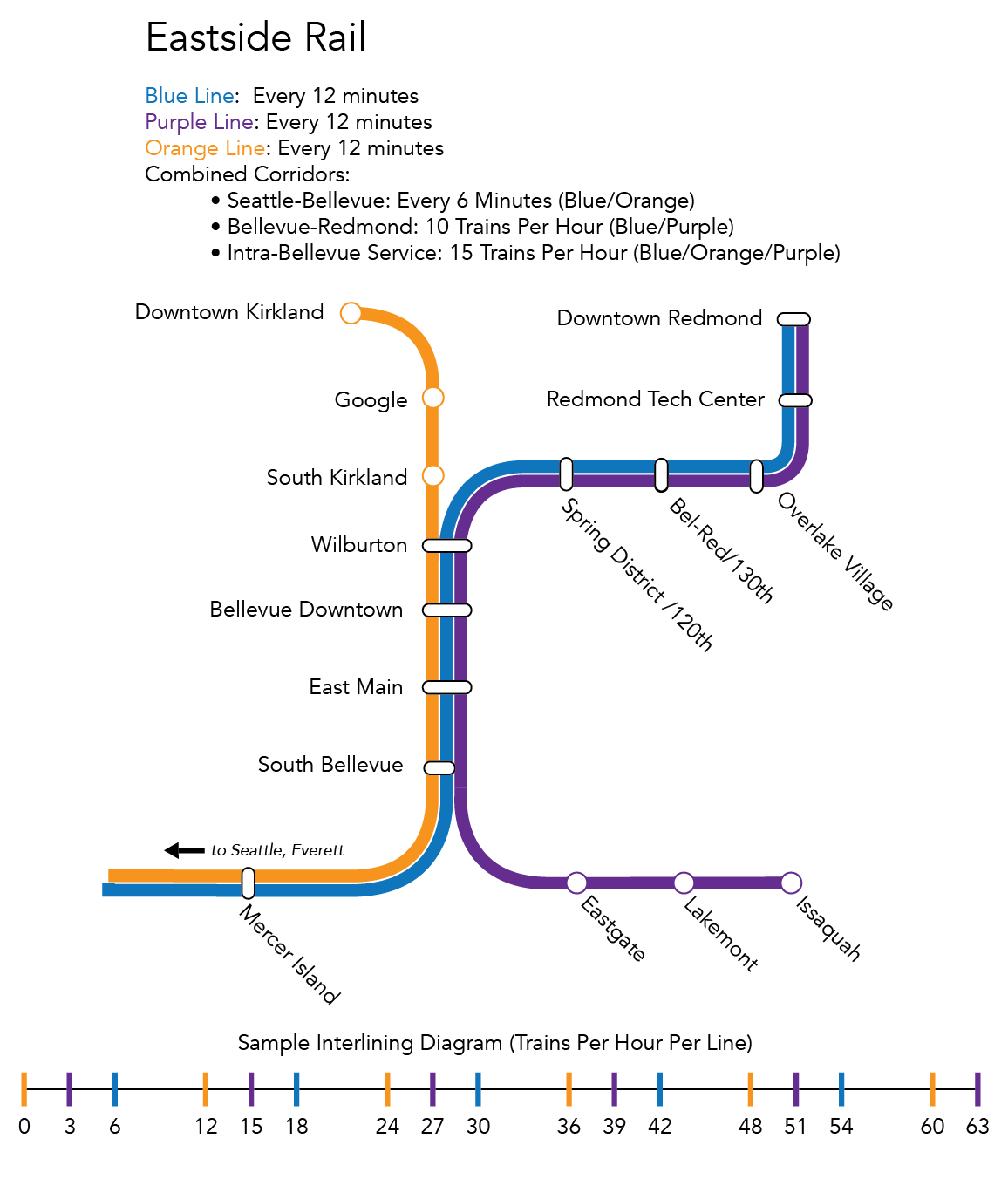 5. Dedicate the entire remaining Eastside Rail Corridor to a permanent walking and biking trail. As the political trade for permitting transit on the CKC between Wilburton and Kirkland, regional stakeholders should agree that the remaining ERC trail segments (Woodinville-Kirkland, Wilburton-East Main, and I-90 to Renton) will be permanently and exclusively preserved for people walking and biking. These segments are either rural or built along the lakeshore, precluding their effective use as high capacity transit corridors. We can present this to residents and voters as taking only the minimum transit right-of-way that we need, while preserving 75% as a exclusive trail in good faith.

190 Replies to “A Grand Bargain for Kirkland in ST3”