There are those who believe the debate over light rail in Seattle began in November, 1851 with the landing of the Denny party at Alki. Seattle Mayor Bertha Knight Landes (1926 – 1928) created a committee of businessmen to  study rapid transit. However, most point to the defeat of the 1968 and 1970 Forward Thrust bond issues as the time when mass transit became political road-kill for a generation. Seattle’s federal match went to Atlanta to build MARTA.

How far we have come. Since 2009 thirteen stations have served thousands of passengers every day (currently over 36,000 boardings a day), and we’re just getting started!  This week we celebrate the completion of stations on Capitol Hill and Husky Stadium, and soon, South 200th. This second round of station openings is a game changer. A person on Capitol Hill will be able to get to the University or Downtown in five minutes by light rail! A UW student can live in Des Moines and get to the University on LINK.

As the Sound Move package essentially completes its mission this year, I’d like to share one perspective on the prickly history of our region’s debate, its starts and stops, and the challenge of building consensus on our path to light rail. 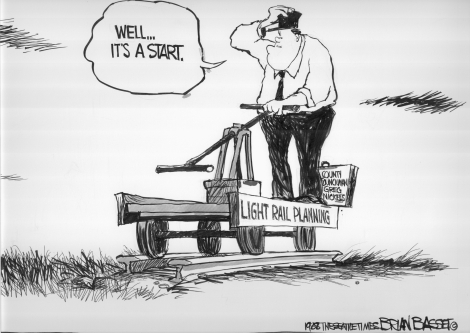 I got involved in 1988, co-sponsoring an advisory ballot asking King County voters whether to build a light rail system to open in 2000. Nearly 70% said yes and it broke the political logjam.

After several more years of planning and the creation of the Central Puget Sound Regional Transit Authority in 1993, the first vote to fund Mass Transit in 25 years was scheduled for a March 14, 1995 special election. In addition to Commuter Rail, the RTA plan contained a surface light rail system connecting Tacoma to Seattle, north to Lynnwood and east across Lake Washington on I-90 to Bellevue and Redmond.

That measure went down to defeat and history repeated itself – mass transit once again was treated by many politicians in Olympia and the region as political road kill.

Despite a close outcome, the votes were not evenly distributed. Seattle overwhelmingly passed the measure – but the rest of King, Pierce and Snohomish Counties voted no. Some say that Prohibition would have polled better than the RTA did in Everett. Politically it was necessary to show broad support, not just from a Seattle-dominated electorate.

Critics often bemoan the absence of leadership in our civic affairs, but our regional leaders responded to the defeat of the first RTA plan with creativity and courage. 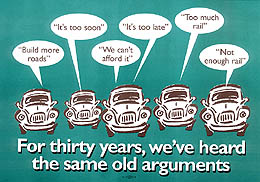 In the end the “Sound Move” plan was scaled back to a Light Rail line from the UW to SeaTac. Added were regional bus lines, park and ride lots, HOV access ramps and a concept called “sub-area equity”. The election was set for November 5, 1996.

This time voters in all three counties approved the plan. At last it looked like smooth sailing for a Metro Seattle mass transit system!

It turned out the challenges of actually building a system were far greater than anyone had imagined and at one point, in 2000 – 2001, the project almost imploded. But the members of the Sound Transit Board persevered and hired an outstanding CEO in Joni Earl.

As the new Seattle Mayor in 2002, I gathered all the City staff working on the light rail project and told them our job was to team with Sound Transit to make sure the system got built. This was a relief to many staff who really did not know if the previous City Administration supported or opposed building it. We finally broke ground on November 8, 2003 ending once and for all the debate over whether to build light rail mass transit.

It has been an amazing adventure. While certainly not for the faint of heart, it was an incredible honor to work with the elected officials on the ST Board, the staff and particularly the interested citizens who have engaged, often passionately, in this saga. And never dull! In this last quarter-century we have come a long way and we have much work to accomplish in the next few years. I do wish the voters had approved the Forward Thrust plan in 1968, but what a ride our generation would have missed!

Greg Nickels is a former Mayor of Seattle, King County Councilmember, and Sound Transit Board Chair. He is a founding father of Sound Transit, and was perhaps the single most important figure in the passage of Sound Transit 2. He currently serves on the Transportation Choices Coalition Board.

51 Replies to “Light Rail: A Long and Winding Road”