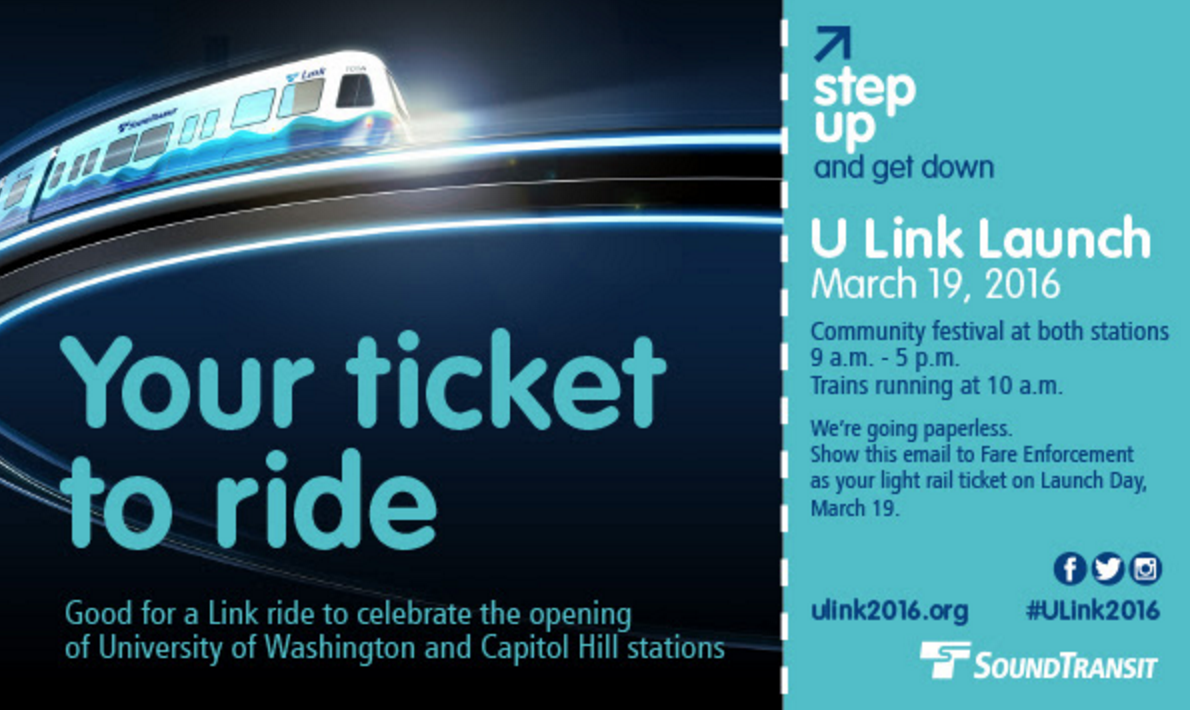 Saturday’s ULink launch promises to be a hell of a party. Here’s what you need to know to have a great time celebrating a historic day for Seattle’s transit.

If you won a Golden Ticket to be on the first train from UW, check in at UW Station between 7:30-8:25am. You’ll get a golden lanyard and commemorative ORCA card with 2 weeks worth of fare loaded, and in the event of queues during the day on Link trains, the pass will allow you to skip to the front of the line. You can freely tour the station until 8:25, after which riders will head to the UW platform for an 8:45 ceremony and departure to Capitol Hill. After a 9:00 ceremony on the Capitol Hill platform, Golden Ticket riders can remain and tour Capitol Hill Station until 9:30.

Join Mayor Murray at the North Entrance to Capitol Hill Station for the official countdown, with confetti cannons and much nerdy rejoicing.

Please note that if taking transit to the festivities, agency trip planners have Link operating all day. This is a technical error. You will not be able to use Link to reach Capitol Hill or the UW until 10 a.m.

Fares are free all day if you have the above ticket either printed out or available to show on your phone.  ORCA-to-go will be available at both stations all day, offering regular ORCA cards in addition to youth, RRFP, and ORCA Lift verifications. And this is just the beginning, as ORCA-to-Go will be serving ULink stations through April 16.

Come for the trains, stay for lunch. ST will have a variety of food trucks, including Snout & Co, Moto Surf and Raney Brothers BBQ at UW Station and Athena’s, Jemil’s Big Easy, and Street Donuts at Capitol Hill Station.

In addition, you can get a taste for the Broadway Farmer’s Market’s permanent home adjacent to the station on Nagle Place. The market will host a pop-up version from 9am-5pm, with a wide variety of vendors including Nash’s Organic Produce, Tonnemaker Family Orchard, Sno Valley Mushrooms, Nature’s Last Stand, El Chito‘s, Loki Fish Co.’s, Mystic Kombucha, Miri’s Poffertjes.

Sound Transit has booked 6 DJs and more than a dozen other performance artists, and they’ll be playing all day at the station concourses and mezzanines. See the full lineup here.

The “Marketplace” section at UW will host Sound Transit and nearly 100 volunteers with Transportation Choices Coalition to discuss ST3. BikeWorks will also host a bike valet with free tuneups at both stations.  At Capitol Hill, the pop-up Broadway Farmer’s Market will also be in the Marketplace section.

The most important part of the day, of course, is Seattle Transit Blog’s all-ages ULink Launch Party at Charlie’s from 3-5pm, with various other groups, such as the Sierra Club and Seattle Subway hosting their own parties nearby for their staff, volunteers, and activists. Start with ours before heading to theirs!

After a morning guest piece reflecting on the long road to get to ULink, the blog will have a day-long open thread with photos, anecdotes, and more.