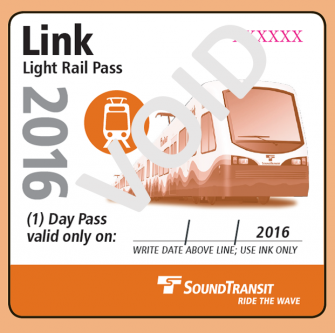 Sound Transit and King County Metro have been brainstorming ways to make their free-ride programs work for each others’ services, in response to a petition by the Transit Riders Union.

The county distributes paper tickets through non-profit agencies that serve homeless clientele. These tickets are honored on ST Express buses operated by Metro. Sound Transit distributes day passes that are only accepted on Link. The tickets cost the agencies 20% of face value, which is to say 50 cents for most tickets. The day passes cost the agencies $1.00. Naturally, most agencies opt not to get involved with the more expensive, less versatile, Link passes.

ST and Metro are considering a plan to offer a combo of a Link day pass and some tickets, for $1 cost to the agencies.

Multi-service day passes were offered back in 2012, but those passes went away after numerous complaints, including the use of erasable ink to fill out the dates, and failure by distributors to fill out a date. They were kept on Link because fare enforcement officers could take the time to check for fraud.

The free ticket program is the very definition of the acronym “PITA”. Agencies have to go through a one-year certification process to be allowed to give out tickets. The agencies have to collect personal information each time they give out a ticket. They have to pay the county 20% of face value to receive those tickets. They have to keep lobbying for more tickets as the homeless population balloons. For clients, having to get free bus tickets one at a time is the worst possible situation, next to no transit access at all. Often, there are no tickets available. Having the tickets not be usable on Link, when various trips now require using Link, is forcing a fresh round of pontification.

Trying to bring transit fare media distribution into the 21st century, through e-purse and/or pass uploads at hundreds of agencies, is far beyond what most agencies serving the homeless population are set up to do. Indeed, at all four locales in the US that have programs to give out free monthly or longer passes for the homeless population (Santa Clara County, Phoenix, Minneapolis / St. Paul, and Miami / Dade County), the job is shunted off to non-profits to deal with, and minimally advertised.

The ORCA LIFT program has served those who can’t afford to pay the full fare well, but it wasn’t designed to solve the problem of those who can’t afford to pay any fare. However it, along with the youth ORCA card and the Regional Reduced Fare Permit for seniors and riders with disabilities, may play a key role in solving the problem of homeless access to public transit.

First, give out paper monthly passes, covering the rest of the current month, at all the agencies currently offering free one-ride tickets. The passes would have the month and year clearly printed on them, and could be printed in a distinct color/design for that month. This solves the problem of invisible ink and failure to fill in dates that led to the demise of the free multi-modal day passes.

Second, when giving out a pass (or when telling a client that the monthly supply has run out), also provide a voucher that certifies that individual is eligible for a free monthly pass for the next month, and directs the recipient to locations (possibly Public Health, possibly Metro’s customer shops) where that voucher can be converted to a monthly pass for the stated month on an ORCA LIFT, RRFP, or youth ORCA card. The pass for the current month could also possibly be convertible to an ORCA pass, with proper identification.

Third, to make the concept of free transit access for the homeless more palatable to the general public, set a date for the elimination of paper transfers. Make ORCA cards widely available for free for a period surrounding the cut-off date.