[Clarification: the post states that carsharing vehicles have “the right to park…in any legal parking spot at no charge”. While users do not pay for street parking at the point of use, the city does charge a flat annual fee of $1,730 per vehicle, amounts are adjusted annually based upon actual usage, and such fees are built into member pricing. – Zach]

Back in 2013, when Daimler launched its Car2Go carsharing service in Seattle, I lamented the fact that the Car2Go service area (the boundaries where cars can be parked and left for the next customer) stopped short of serving West and Southeast Seattle—two areas with diverse populations and, tellingly, more lower-income people than the Central and North Seattle neighborhoods Car2Go did serve first. At the time, I expressed some incredulity that Car2Go considered neighborhoods like Mount Baker and Columbia City “new and developing areas,” which struck (and strikes) me as code for “places that aren’t mostly white yet.”

Car2Go eventually expanded its service, and in 2015, the city adopted legislation that increased the number of “free-floating car share” permits that also required all new carsharing services to expand their service areas to include the entire city within two years. The implication was clear: If the city is going to give your members the right to park your cars in any legal parking spot [see note above], you have to serve the entire city, even the parts that may be less white—and less lucrative.

BMW’s new ReachNow service launch shows the wisdom of that rule. ReachNow, which costs 49 cents a minute (to Car2Go’s $0.41), has an initial service area virtually identical to Car2Go’s, excluding all of West Seattle and Southeast Seattle and stopping just a couple of blocks south of I-90, at S Lander St.  ReachNow has two years to expand its service area to include the whole city.

Reach Now CCO Sandra Phillips says the company launched “with an initial fleet of only 370 cars [according to the city, 363-Ed.] and a more compact home area to ensure that our members have access to a vehicle when they need one,” and said they’ll expand once they get a larger fleet. She did not respond to questions about why ReachNow’s “compact home area” extends all the way up to Northgate while excluding the entire southern half of the city.

Contacted by email, Car2Go Seattle general manager Michael Hoitink said basically the same thing, describing his company’s very similar initial home area, which extended as far north as Bitter Lake and Broadview, and included many of the North End’s iconic single-family neighborhoods, as encompassing “the downtown core and surrounding areas where population density is the highest.” He continues, “We’ve learned that when looking at the size of a free-floating Home Area, it’s important to consider factors like demand and mobility patterns to ensure vehicles are available where there’s demand, and that vehicles aren’t getting “stuck” in lower-demand areas.” In Seattle’s case, one of the places the company didn’t want its cars getting “stuck” in was the entire Rainier Valley.

City council president Bruce Harrell, whose council district (2) encompasses Southeast Seattle, told me in an email that while he knows ReachNow will expand to serve the whole city in two years, “I am disappointed they are not serving Southeast Seattle in this initial rollout. In speaking with new startups and businesses looking at the Seattle market, I have emphasized to them that they should embrace the diversity of Southeast Seattle. … I will reexamine the current car-share ordinance and Director’s Rule to ensure we have the strongest equity policy for our car-sharing programs. I am also in the process of contacting BMW to impress upon them the policy reasons we pushed to have Car2Go in Southeast Seattle and to convey to them our community’s interest in having their presence in our community.” 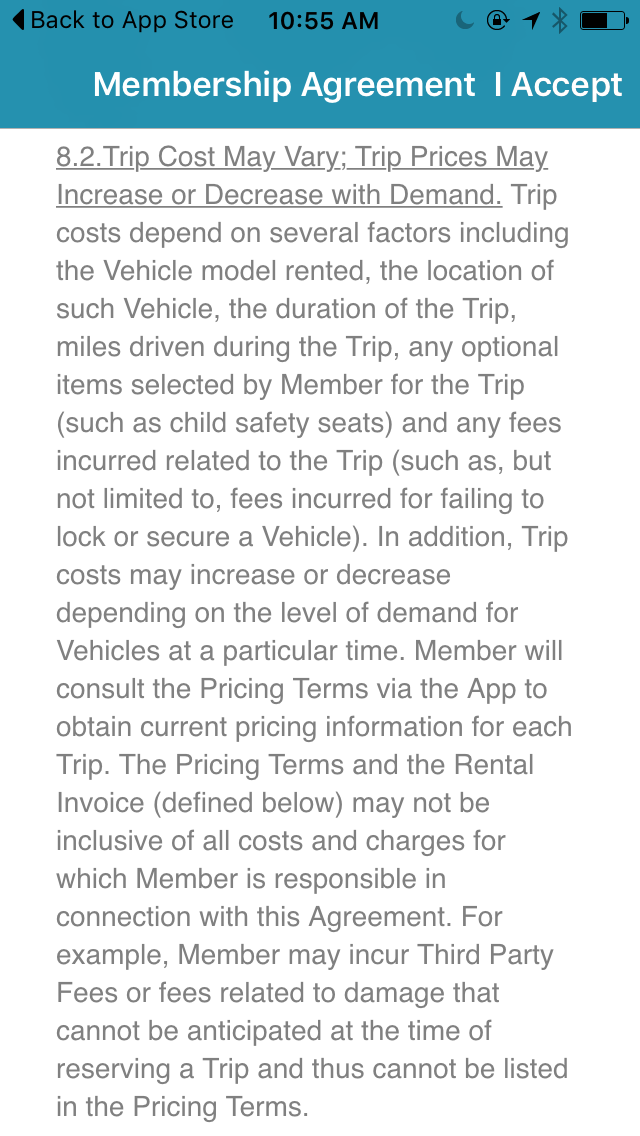 ReachNow is different from Car2Go in at least one way (other than the size of its German-designed cars): Its user agreements include a provision allowing ReachNow to change the price based on user demand, a practice commonly known as “surge pricing.” Prices would be highest when demand is highest, such as rush hours and holidays. Since ReachNow charges by the minutes, this practice would be especially lucrative during times of high traffic congestion, when drivers are more likely to be stuck in traffic. And ReachNow, unlike Car2Go, doesn’t have a per-hour price cap; their price caps start at three hours ($50), and go up to 12 and 24 hours.

Phillips didn’t respond to questions about the potential that surge pricing will mean major (and perhaps unexpected) price hikes for ReachNow customers, but did say the company had no immediate plans to implement surge pricing. ”
We included the potential for variable pricing in our membership agreement as it could be implemented down the road as our service grows and user demand increases,” Phillips said. “And, while we are currently evaluating options, we don’t have specific details to share about what that may look like or when it may be implemented.”

SDOT’s Norm Mah says the city has no law regarding surge pricing by carsharing services. Uber, which charges more during periods of high demand such as New Year’s Eve, is currently defending itself in a class-action lawsuit charging that Uber’s CEO conspired to drive up prices. Car2Go does not include a surge-pricing provision in its user agreement.