For the first time since the merger of Metro and King County in 1992, Metro released a draft of a new Long Range Plan (LRP) last Monday, and it will update the plan every 6 years from now on. The plan looks at two time horizons, 2025 (when ST2 will have come online), and 2040 (when potential ST3 projects will have finished).

The plan is primarily an operational document, looking at planned growth, service levels, route restructures, operational needs, and technological innovation. There are issue areas you shouldn’t expect in long range plans, and sensitive discussions of governance structures is one of them. It would be awkward and indeed inappropriate to imagine changes to such things in a single-agency document. Though there is much ink spilled and good ideas presented about agency integration, it’s important to remember that Long Range Plans are invariably agency-maximizing documents. Responding to the existential question of Metro’s role in a post-ST3 world, the LRP attempts to position Metro as bigger and more important as ever.

In a briefing with Metro planners last week, they stressed that the service network is not a formal restructure proposal, but represents an integration of planners’ current thinking and the expressed desires of King County cities. Each iteration of restructures would still go through a formal process.

But it’s still fascinating. The plan assumes the passage of ST3, provides comprehensive Link feeder service, dramatically reduces the number of peak-hour expresses into Seattle, and provides a much stronger all-day network countywide and in Seattle. There are a lot of courageous choices in the plan, with Metro going nearly all-in on a citywide frequent network feeding Link. There is a lot of new service that would require substantial capital investments, such as service on NE 65th Street from Ballard-Phinney Ridge or service from SLU-Capitol Hill via Lakeview/Belmont. There are some bizarre express network choices, such as Snoqualmie-Auburn via SR 18. But overall the plan represents an agency whose thinking is heading in the right direction.

We’ll dive deeper later this week into some of the transit network proposals, but the high level numbers are:

The plan envisions building 13 more RapidRide lines by 2025 and 7 more between 2025 and 2040, for a total of 26. Some current routes would receive RapidRide treatment (40, 44, 372, 120, and 45), others would be new routes entirely (Madison BRT, Kenmore-Overlake, Kent-Federal Way via Star Lake Link Station), and still others would be restructured in part or in full and upgraded to RapidRide. Each of these routes is clickable at the Service Network Map, but for shorthand (and with my own placeholder route letters), they are:

A Strong Base Network

The plan would broaden the peak period and boost evening and weekend service to provide a strong all-day network. Every major corridor in Seattle would have either RapidRide or frequent service. 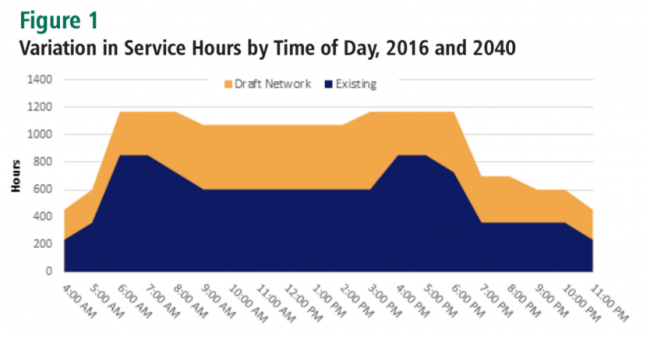 The plan would blend infrequent local bus service and alternative services into a single analysis framework, working with communities in each individual corridor to determine how best to serve it. Some of these low-demand areas that have traditionally had fixed-route service would probably retain it (West Magnolia, Colman Park, etc), while others may get DART vans, Car2Go/ReachNow memberships, or even access to driverless cars.

50% Increase in Parking, but None in Seattle

The plan would increase parking across King County by 3,800 stalls on top of the 9,700 planned by Sound Transit, for a total of 13,570 new stalls. Metro would classify areas by “Access Zones” to determine demand for parking, and prioritize it only in Zones 3 and 4 (Green and Gray below).

The plan largely punts the question of an expanded trolley network to the City of Seattle. It calls out a limited set of improvements, such as electrifying Route 48 and adding wire on 43rd to serve UDistrict Station, but otherwise largely defers to Move Seattle plans for Rapid Ride conversions, some of which may be electric. Another possibility is that Metro wants to see how the Proterra-style electric bus technology matures, and wants more electric buses but is hesitant to hang more wire.

More to come in the next few days.