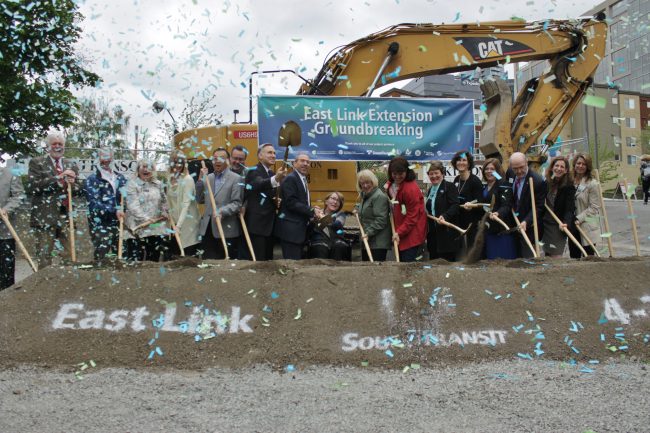 On an overcast Friday afternoon at a gravel lot in downtown Bellevue, Sound Transit broke ground on the East Link light rail extension, bringing rail transit from Seattle to Overlake via Bellevue one step closer to realization.

The ceremony, attended by Sound Transit Board Chair and King County Executive Dow Constantine, U.S. Senator Patty Murray, current Sound Transit CEO Peter Rogoff, former Sound Transit CEO Joni Earl, Mayor John Stokes of Bellevue, King County Council member and former Bellevue mayor Claudia Balducci, and other local politicians, was attended by a few dozen Sound Transit staff, contractors, and members of the public, who listened to a series of short speeches and enjoyed live music from the Mercer Island High School Jazz Band. Of note was the clever use of biodegradable chalk marking out the Sound Transit logo on the dirt that was dug up by dignitaries with their golden shovels for the actual groundbreaking.

Since it was approved as part of the Sound Transit 2 ballot in 2008, East Link has been mired in setbacks and delays ranging from routing choices and station placements in Downtown Bellevue to lawsuits launched in opposition to the project by various groups. The $3.7 billion project, funded partially by a $1.7 billion federal loan, is scheduled to open in 2023 as the Blue Line and projected to carry 50,000 riders every weekday; end-to-end travel times between the Downtown Seattle Transit Tunnel and Redmond Technology Center on the Microsoft campus is estimated at 29 minutes, which is as fast as existing bus service during the best of traffic conditions.

Some homes in the Surrey Downs area, near the future East Main Station at the south end of the Bellevue Tunnel, have already been demolished in preparation for the start of tunneling. Construction on the 1/3-mile tunnel through downtown Bellevue is scheduled to last well into 2020 and will be excavated conventionally by hand via the Sequential Excavation Method (SEM), a departure from tunnel-boring machines used on other Link tunnels. The Overlake and South Bellevue segments will both begin construction later this year. Other work in downtown Bellevue, including the construction of a station at Bellevue City Hall a block east of the transit center, will begin in mid-2017 at the same time as major work on the Bel-Red and Interstate 90 segments of the line, the latter of which includes retrofitting the Homer M. Hadley floating bridge and existing tunnels in Mount Baker and Mercer Island for light rail trains.

The Bellevue Tunnel segment of East Link is expected to play a large role in the proposed Sound Transit 3 expansion, with the possibility of trains from Seattle and Issaquah/Eastgate interlining through Downtown Bellevue before splitting off to serve Redmond and Kirkland. The proposed southern transfer between the lines has moved from Wilburton Station (near the Overlake Hospital east of downtown) to East Main Station, providing direct service from Issaquah to Downtown Bellevue but also inciting the wrath of nearby homeowners demanding less frequent trains. Even as East Link construction moves forward, there may be further changes afoot for the line in the near and (very) far future.