Sound Transit staff have long suggested by example prior to adoption of the Link line naming system that Central Link will be named the Red Line and East Link be named the Blue Line. Those “example” names became official in June when ST announced new and improved signage to be unveiled systemwide when U-Link opens next year.

I asked Sound Transit’s Bruce Gray about choosing the colors. This is what he said:

Red and blue were chosen for the first two segments because they are contrasting colors (create a high visual distinction between the two lines). And, we followed the established convention and practice of other transit agencies by starting with red and blue. Our original Central Link line color was a red/maroon color so it made sense to make that segment red.

Austin, Dallas, Houston, St. Louis and Washington DC picked Red for their first rail line. Los Angeles, Minneapolis, Portland, Charlotte, Salt Lake City, Sacramento, and San Diego named their first lines Blue. Some of them were given a color name from the beginning and some acquired colors later as the system expanded.

The line presently known as Central Link (Westlake to SeaTac/Airport) has been colored both red and blue throughout its operational history. This confusing state is visible in all the information products ST has produced. Let’s begin with the system map. 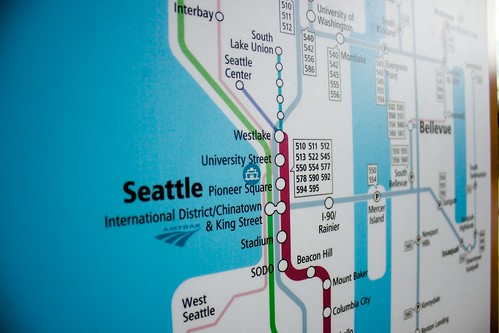 In June 2009, one month before Link opened, ST introduced the diagrammatic system map in use today. The map gave Link a red/maroon color. However, the last edition of ST’s geographic system map, found in the June 2009 schedule book, gave Link a grey color. Since schedule books have a lead time of weeks to months prior to publication, the map found in the “June 2009” edition was likely created in May or April.

Even Metro’s system map at the time colored Link red. Later revisions to Metro’s maps colored Link in a teal blue to avoid confusing it with RapidRide, which has red as its brand color.

While the system map colored Link red, the Link line diagrams in stations and on trains use blue. To add to the inconsistency, the station area maps depict the rail line and station footprint in red/maroon.

The Link schedule brochures and the map in the schedule book are blueish due to the limitations of printing with only two colors, black and blue, much like Metro’s route timetables. All of the route maps in the book are blue. On ST’s website, Link is shown in teal blue on the Bing-based map and additionally in dark blue for the non-downtown tunnel section on the Link schedule page. The same colors are used for Link light rail (the system itself and mode icon) and Tacoma Link, instead of the purple used on the system map.

Looking beyond the operational signage and information and into the planning documents, the 2008 ST2 plan map showed Link light rail in a bright red, while the failed 2007 Roads & Transit plan mapped Link in blue. The 2005 Long Range Plan showed “electric light-rail service” in red, as does the current Long Range Plan adopted in 2014. Finally, the ST3 draft priority projects map has light rail in red.

It’s easy to understand why people would think the “right” color for Link would be one or the other and the decision could have easily come down to a coin toss but ST gave its reasons. It will be many more years, assuming ST3 is approved, before the next Link line colors are chosen when potential lines undergo an alternatives analysis. If you can’t wait that long, there’s always Seattle Subway’s colors and your imagination.

63 Replies to “A Brief History of Link Line Colors”