On Monday we looked at travel times on Link’s ‘Red Line’, the central spine that will run between Lynnwood and Des Moines (or possibly Federal Way) in 2023. We made a few observations along the way, including the relative benefit to Snohomish County compared to South King, about the gifts of Link to the Rainier Valley, and more. Today we’ll look at the Blue Line – or East Link – which will run from Lynnwood to Redmond via Bellevue.

At the outset, two characteristics differentiate the the Blue Line (‘East Link’) from its spiney anchor, the Red Line, namely demand symmetry and affluence:

Much like the Red Line, the Blue Line will supplant already successful bus corridors while also creating new travel opportunities via intermediate stations. Relative improvement in travel times is greatest for the new intermediate stations that currently require transfers, while for destinations that replace current bus service, Link’s primary selling point is reliability.

The Blue Line will likely replace Route 550, force a restructure or deletion of Route 226, provide a faster alternative to the B-Line, and replace the Bellevue-Redmond tail of the 566/567. The chart below shows Link travel times to Westlake atop today’s scheduled bus variation for each Blue Line station area. As you can see, the Blue Line halves travel time between Westlake and Overlake Village, Bel-Red, the (yet unbuilt) Spring District, and the East Main area. For today’s big transit markets at Microsoft, Bellevue TC, South Bellevue Park & Ride, Mercer Island, and Judkins Park, the train is slower than the fastest bus trips, but the Blue Line virtually guarantees a median travel time or better in perpetuity, everywhere along the line. For anyone stuck in reverse-peak traffic on I-90, the gold-plated Blue Line is likely actually worth its weight in gold.

Within the Eastside, Link substantially improves travel times to Downtown Bellevue while also doubling to quadrupling the frequency, depending on the station area in question.

Between Redmond and Downtown Seattle, the situation is slightly ambiguous, and Link’s time savings will depend much on how well or poorly future freeway bus corridors perform, or whether they are retained at all. However, assuming that Redmond-UW bus service continues to exist along SR 520, savvy riders at Microsoft or Overlake Village may want to check traffic before getting on the train. In normal to moderately congested traffic, taking an SR 520 bus and transferring to Link at UW Station may be a few minutes faster. Though the transfer would introduce significant uncertainty, the doubled frequency of Link on the shared corridor between Lynnwood and Chinatown brings the expected wait time down to just 2 minutes. Though bus+Link would certainly be faster off-peak, peak performance would again depend on future traffic levels.

For Issaquah-Northgate trips currently served by the 555/556, Link is likely to be a far better bet. The ability to transfer at South Bellevue or Mercer Island will make for a relatively seamless experience and free riders from the slog down Bellevue Way. 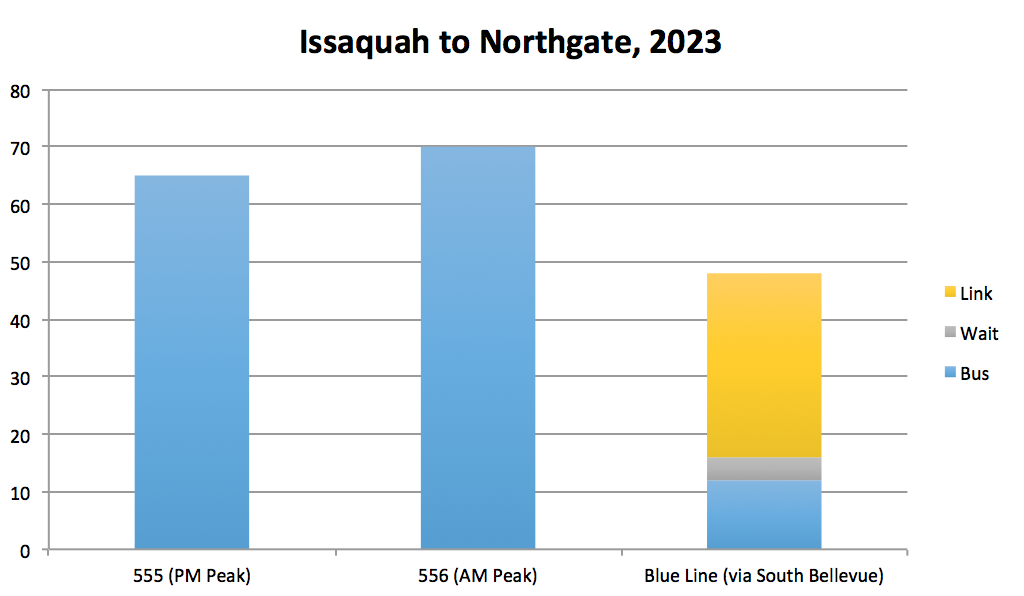 On the Red Line, I defined Link’s ‘centers of gravity’ as Downtown (for maximizing short trips) and the Rainier Valley (for minimizing long trips). The Blue Line is a bit more fragmented by uneven stop spacing – a natural consequence of a long lake crossing – but the centers of gravity are still what you might expect. For maximizing short trip possibilities, Downtown still reigns, as its residents can travel anywhere from Lynnwood to Bel-Red in less than 30 minutes, with only Overlake inching beyond 30 minutes. But Judkins Park and Mercer Island also do very well. At Judkins Park, a 30-minute window gets you to either 185th St or Overlake, whereas for Mercer Island a 30-minute window gets you to either Northgate or Overlake. If you want to live in a residential part of Seattle but have good access to Downtown  Seattle (10 minutes), Downtown Bellevue (14 minutes), and Overlake (24 minutes), Judkins Park will be about as good as it gets. 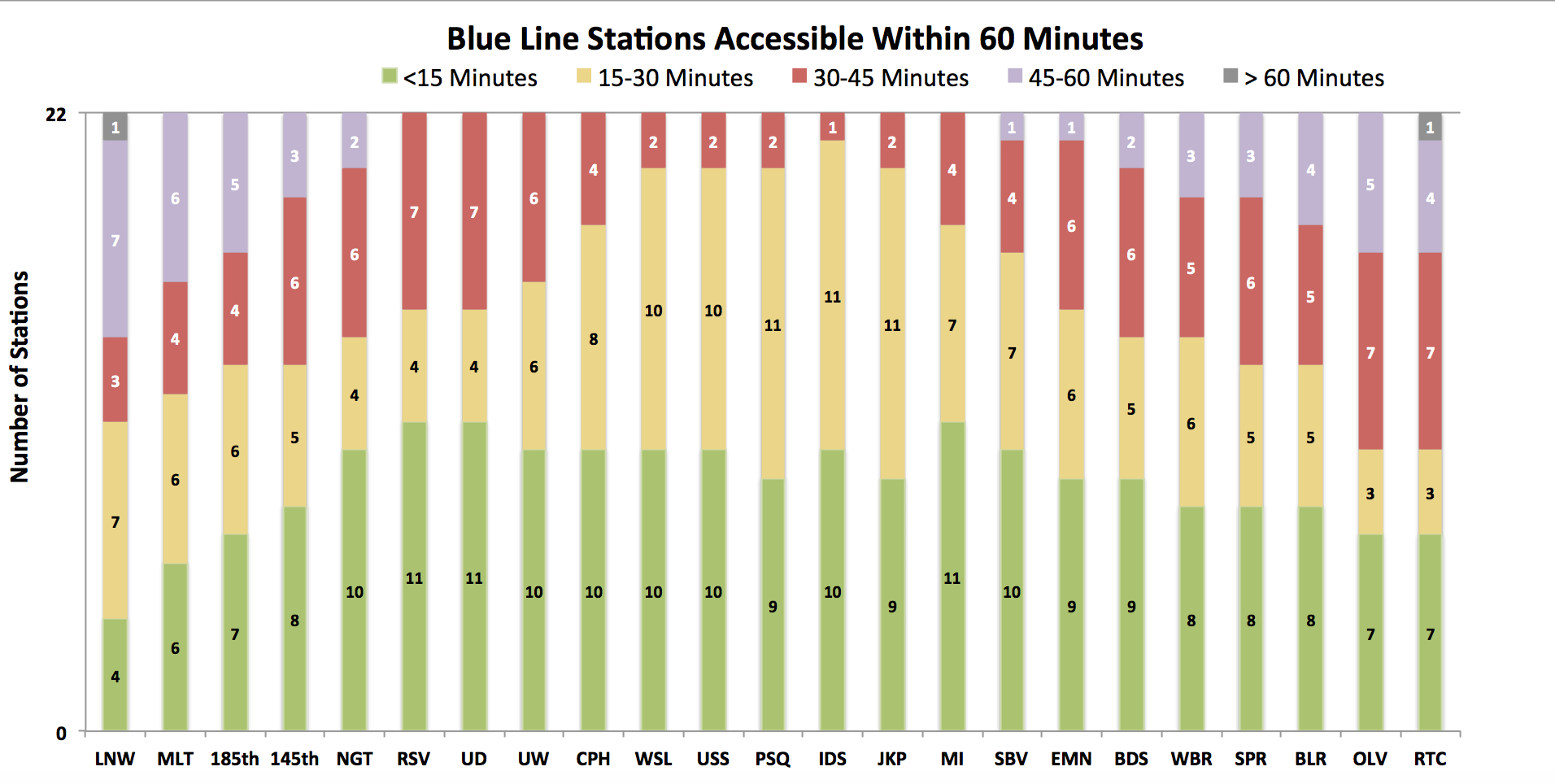 What do you see? How do you plan to use the Blue Line?

This is Part 2 of a 3-part series. Part 1 looked at Lynnwood-Federal Way (The Red Line), and Part 3 will look at bus vs. Link travel times for all station pairs in the system.