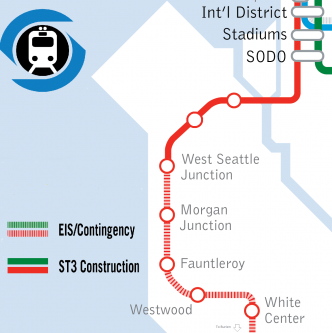 The West Seattle light rail line proposed by Sound Transit as part of the draft ST3 package will revolutionize transit on the peninsula. The proposed alignment in West Seattle is excellent, with the highest possible reliability due to a fixed 140’ bridge over the Duwamish River and no traffic crossings in SoDo or on the West Seattle Peninsula. The extension to Alaska Junction will serve more than just the area around the stations; the line will enable a major bus restructure allowing Metro to refocus resources toward improved bus service across West Seattle. This is why we advocated for the North Delridge stop and were excited to see it added in later drafts.

-The draft plan promises rail reaching West Seattle in 17 years. As we have mentioned in the past, the City of Seattle can reduce delays in the planning process by classifying Light Rail as a “permitted use,” instead of requiring Sound Transit to apply for expensive (and slow) permits for every new line. Seattle should eliminate permitting requirements, today, so that voters are guaranteed faster delivery by November.

-Seattle should also cooperate to minimize the number of alternatives studied during the EIS process by eliminating low-quality options (like at-grade rail) that should be rejected out of hand. This can speed up the process by as much as three years–cutting nearly 20% off the delivery timeline. To achieve this win, the neighborhoods, business community, and City of Seattle must be united and unswerving in their efforts to reduce local barriers to completion. This is much preferred to what happened in the Bellevue East Link process, where infighting delayed their project completion from 2021 to 2023.

-Allow 24/7 construction. Large parts of the West Seattle alignment are in industrial areas where there would be no impact from construction after normal business hours.

-Financing has an impact on the project timelines presented by Sound Transit.  If the new downtown transit tunnel is funded as a regional asset (with contributions from all the subareas that will use the tunnel), it would clear the way for faster timelines in Seattle. Seattle would be able to spend its money on lines for its own residents in West Seattle, rather than subsidizing riders from the other subareas.

Transportation problems in West Seattle largely stem from a lack of access and resiliency. Entry points to the West Seattle bridge are clogged during rush hour. Whenever there is a disturbance anywhere near the bridge, it also causes a cascading transportation nightmare. The Link extension to the Junction will be a great step toward solving both of those issues, but not the final step. Join us in urging Sound Transit and the City of Seattle to improve the final plan for West Seattle.

How can you help?  Please do any or all of the below!