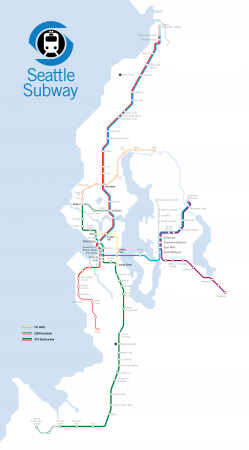 Seattle Subway encourages all supporters of great transit in the Puget Sound region to include the following key points in their feedback to the Sound Transit board. Please email the board with your comments, as they are now due by Monday, May 2.

Seattle Subway thanks the board for proposing a transit package that meets the scale of the need in the Central Puget Sound region. As an advocacy group favoring robust, high quality, high capacity transit investments throughout the three-county metropolitan area, we also appreciate the opportunity to provide feedback on the ST3 draft plan. In addition to our support of the principles of the Transit Access Stakeholders group to which we are a party, we wanted to provide additional emphasis on the following issues:

We are excited for what is possible as part of this robust transit expansion package. We look forward to the impact this has on both economic development and quality of life in great communities from Tacoma to Everett to Redmond and Issaquah, and in Seattle itself. The board has attempted to meet the depth of the challenge our region faces when it comes to transportation. We expect the board will succeed in making many of these improvements that will improve likelihood of passage of such an important measure.