The U-Pass transit program for UW Faculty and Staff has been on an unsustainable financial trajectory for years, with a perverse reliance on parking revenue that cannibalizes funding as it succeeds in reducing driving. Rules against the gifting of public funds also require that these and other programs (such as ORCA Business Passport) be revenue neutral, with program costs rising with usage. (Though also partially funded by parking revenue, the student U-Pass has been on stable financial ground ever since the 2011 decision to make it a universal pass rather than opt-in.)

Much like health insurance premiums, non-riding UPass participants allow reduced individual rates. The more successful the program is in changing behavior, the heavier the financial outlay for UW. Indeed, UW achieves the best modesplits in the region, with its 20% drive-alone rate handily besting Downtown Seattle (31%).

But the decade-long financial storm has come to a head in the past few months, with several issues converging simultaneously to produce a complex and unsettling situation.  First, in 2011 there was a failed push to exempt UW from Seattle’s Commercial Parking Tax, which ended with the City agreeing to subsidize the UPass for 3 years instead. Ironically, then-State Senator (and UW employee) Ed Murray lobbied for the change in Olympia, but was successfully opposed by then-Councilmember Sally Clark, while today it is Murray that represents the city as enforcer and Clark that represents UW.

Then a City audit found that UW had raised parking rates by implementing a 63% “Transportation Demand Management (TDM) Fee” in 2011 on all parking transactions, but wasn’t paying Commercial Parking Tax on that revenue. This year UW settled with the city for $4m, and will now pay an additional $3-4m per year as long as that fee is in place. 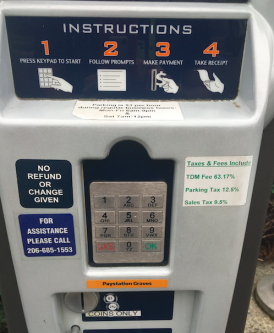 Proposals to raise UPass fees (from $150 to $215 per quarter) to close the funding gap were met with such vociferous objection from SEIU and other groups that the proposal was quickly withdrawn, and the tension led in part to the abrupt forced resignation of UW Transportation Services Director Josh Kavanaugh back in April.

Unable to raise fees and now unable to avoid parking tax on its TDM fee, UW is left in a bind. Not only is the Faculty/Staff UPass program threatened, but anything the TDM fee funds is now threatened, including many of UW’s transportation planners, its Commute Concierge program, its Commute Trip Reduction activities, and key staff  liaisons between UW, Metro, and Sound Transit. Multiple sources have confirmed that UW may soon scrap its Commute Options and Transportation Planning staff.

Beyond the immediate effects on modesplit, this has very worrisome longer-term implications. The remainder of the Burke-Gilman trail rebuild may be in jeopardy, as UW likely cannot afford it despite a $16m infusion from the state transportation package, money it may never claim. This September, the UW will release its draft Campus Master Plan, and it is likely to aim for aggressive growth of 20% in 10 years. Like all Major Institution Master Plans (MIMPs) – such as the torturous process recently played out at Swedish Cherry Hill – these plans tend to center on transportation impacts.

Both the Campus Master Plan and the big UDistrict Rezone are likely dependent on aggressive strategies to maintain or reduce total vehicle volumes, which in a growth context means sharply reducing drive-alone rates below their already low 20%. So at the time when UW must be most aggressive and visionary, it is risking taking many steps backwards at once. Potentially, it could cut faculty/staff UPass, cut its non-facilities Transportation Services staff, and respond to new incentives to maximize parking revenue on currently underused lots (such as E-1).

In addition, cutting transportation planning and programs staff will further exacerbate bureaucratic tensions between UW, Metro, and Sound Transit. The list of conflicts is long, with recent examples being months of process to add bus stops on Rainier Vista, UW’s insistence on parking retention at Husky Stadium reducing bus restructure possibilities, and lack of institutional support for HOV or transit priority on Montlake Boulevard. There is also the back-and-forth about siting Pronto at UW Station, with UW unwilling to give up any of its massive parking lots, and Sound Transit unwilling to use its expensive easement for a 3rd-party capital installation (though we hear there may be movement on this). Sources tell us that a substantial restructure of bus service at University District Station in 2021 is already likely off the table, with the powerful Office of the Campus Architect taking a page from Mercer Island and pre-emptively squashing any hopes of turnaround space for buses.

SDOT staff close to the situation told STB on Wednesday that while the issues are real, the City doesn’t intend to let the snowball roll very far. Both the city and UW have strong incentives for the UDistrict Rezone and Campus Master Plan to go through, and many seem to think that at the end of the day, this clarifying reality will cause forward-thinking heads to prevail. But much is unnecessarily at risk because of the state’s failure to adequately fund UW (which forces this kind of nickel-and-diming), and UW’s failure to fix longstanding and well-known financial problems. But UW’s possible solution  – an axing of very successful transportation programs and staff just when it needs them most – would cut off its nose to spite the face. UW spokesperson Sally Clark is on vacation and her office was unable to comment for this story.

53 Replies to “Is UW Sleepwalking into a Transportation Disaster?”