With the dust starting to settle on University Link, some have turned their attention towards to the other end of the Link light rail system–the south end–and the upcoming opening of Angle Lake Station in SeaTac. With only weeks remaining until the anticipated opening in September, construction on the station and the 1.6 miles of track leading to it from Sea-Tac Airport look just about complete and the first train tests have started. Sound Transit reports that the project is 94 percent complete, with the only substantial construction left for the station being the installation of electrical and mechanical systems, the parking garage, and street-level finishes such as bike lanes and sidewalks.

While the station is not expected to garner much more than a fraction of University Link’s ridership, it brings the system one step closer to Federal Way and points south, to be funded fully by ST3. A station at South 200th Street has been on the books since Sound Move in 1996, having been selected as the original southern terminus of the light rail system until significant revisions to the plan happened in 2001. The $383 million project was funded in the 2008 ST2 measure, with an anticipated completion date of 2020, but was accelerated using federal TIGER grants. Most of the design work wrapped up in 2012 and construction began in 2013. 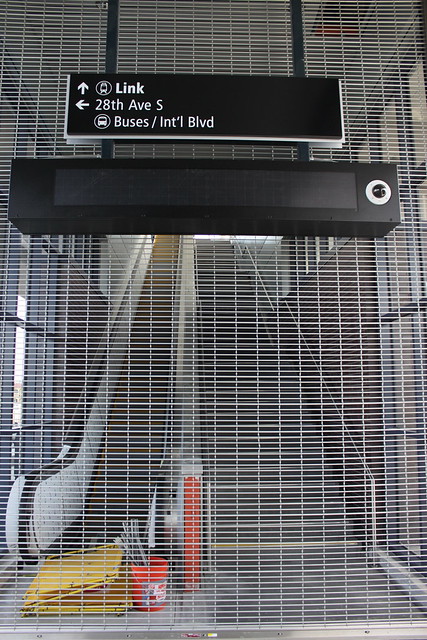 Many of Angle Lake Station’s features herald a return to the architecture and design of the initial Central Link segment, sharing more in common with Mount Baker Station than the likes of UW and Capitol Hill’s new stations. Each entrance has only one escalator, which will presumably be set in the up direction, and a set of stairs up to the platform. The somewhat functional and ill-designed LCD screens introduced with University Link, is replaced with the two-line electronic signs used installed at most stations since 2009, lacking the ability to display real-time arrival information; for the time being, the signs will be sufficient, as they will only need to indicate which parked train will be the next to leave.

At the platform level, the sculpture “Cloud” by Haddad Drugan is suspended above South 200th Street in an array of acrylic discs, 6,000 of them in various colors and shades, moved by wind and shine in sunlight to create motion-based patterns. Riders who venture to the southern end of the line on clear days will also be greeted by unobstructed views of Mount Rainier, the Puget Sound, and airplanes landing at and taking off from Sea-Tac, creating some nice distractions for loiterers to wait for their next train. 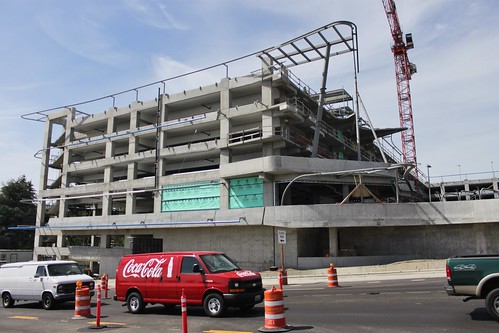 The most defining feature of the station may be its 1,050-stall parking garage, which is still taking shape. The garage will be wrapped in a translucent screen that functions as public art, and sport a public plaza and ground-level retail space as mandated by the City of SeaTac. The garage is also designed to be expandable and attached to a multi-story building that would be located on its west side. The city is exploring possible transit-oriented development around the station, which is currently surrounded by the Federal Detention Center, a long-term airport parking lot, and a handful of strip malls and gas stations. 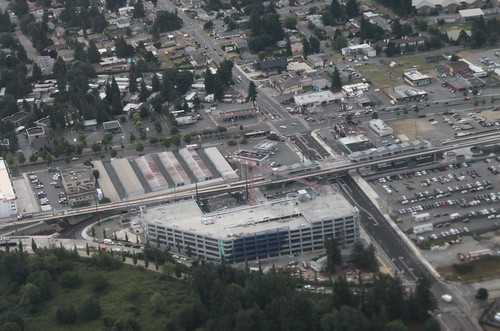