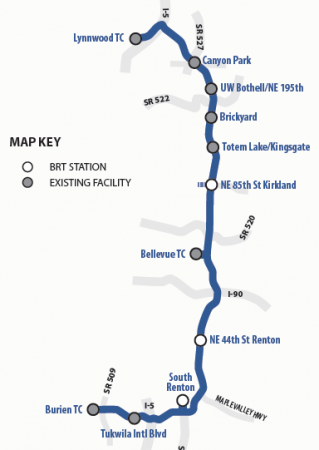 After studies, drafts, public comment, more drafts, amendments, and so on, you might be a little confused about what exactly is in Sound Transit 3 (ST3). This is the first in a brief ST3 reference series about what’s in the package that we’ll vote on in November. Today: the first five years (2019-2024).

Though much has been made of the lengthy timelines for Sound Transit 3 (ST3) projects, our collective impatience can be partially tempered by looking at the continuous series of project openings between now and 2041. The first years after a successful ST3 vote wouldn’t be vacant years of sitting on our hands, but rather a very busy overlap of completing Sound Transit 2 (ST2) projects while getting ST3 underway in earnest.

Over that time period, ST will also complete bus capital improvements near Sumner Station, a $30m project that will add transit signal priority (TSP) at 11 intersections, queue jumps at 2 intersections, and 125 parking spaces in McMillin, WA. This would improve ST Route 596, and presumably a new ST Express route as well.

A similar $60m project to upgrade Pierce Transit Route 1 to BRT will add  some queue jumps and TSP intersections. There will be stop improvements, including nicer facililties, real-time arrival info and off-board payment options.  Most importantly, it also envisions Business Access and Transit (BAT) lanes for about 50% of the 14-mile scope. The south end of the route will get a park-and-ride, size unspecified.

Finally, ST3 funds $65m for capital imrovements for RapidRide C, D, and Madison BRT by 2024. If ST3 were to fail, Seattle would have to find some other source to open Madison BRT on time in 2019.

This period will also see completion of the ST2 package, with 17 Link stations opening between 2021-2023.

Several projects open in 2024. In addition to Kent/Des Moines from ST2, ST3 would deliver 4 new Link Stations. At South 272nd and Federal Way Stations, a $1 billion, 5.3-mile extension would add two stations. The former would be in a trench and include 1,240 parking spaces, added to the 549 already at the Star Lake Park and Ride. The latter would be elevated and include a 400-stall parking garage at the current Federal Way Transit Center to go with the 1,190 already there. The track will mix elevated and at-grade. 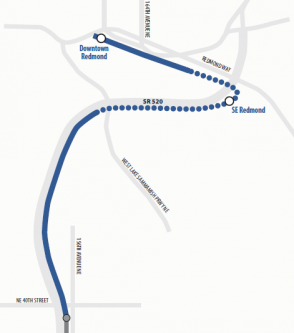 Also in 2024, I-405 BRT will be a 38-mile, $800-900m system with 11 stations from Lynnwood TC to Burien TC. Peak headways will be 10 minutes. ST projects 15,000-18,000 daily riders in 2040. There will be 1,300 net new parking spaces; bus-only lanes and TSP in Tukwila and Burien; bus-only lanes on NE85th St in Kirkland for connecting service; and changes to bring all the stations to a BRT standard. For most of the route, reliability will depend on WSDOT’s commitment to keeping the HOT and HOV lanes free-flowing.

NE145th/SR522 BRT is a $400m, 8-mile line with 8-10,000 riders in 2040. There will be 9 stations and all-day headways of 10 minutes between UW Bothell and the 145th St Link Station.The project will finish the BAT lanes between NE 145th and Downtown Bothell. On NE 145th itself there will be a mix of bus lanes and queue jumps. Downtown Bothell to UW Bothell will be on arterials. Finally, Bothell, Kenmore, and Lake Forest Park will each get 300-space parking garages. 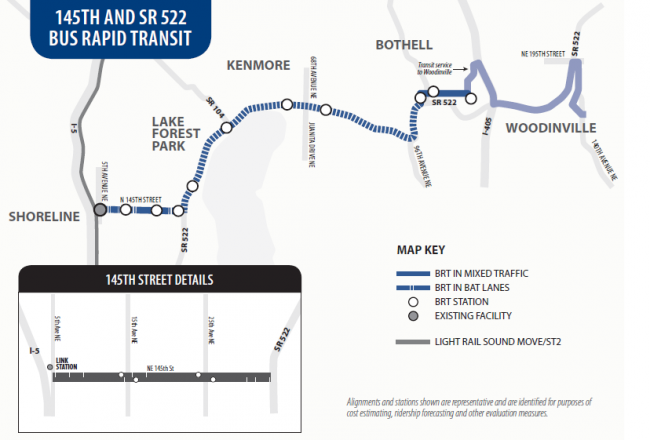 Finally, in 2024  North Sammamish will also get a park-and-ride with “up to” 200 spaces for $20m. Edmonds and Mukilteo will get some mix of additional parking and other access improvements ($40m).

After 2024, things will go quiet for 6 years from a project delivery perspective, with construction beginning in earnest for the next glut of openings in 2030-2031. We’ll summarize those in the next installment.