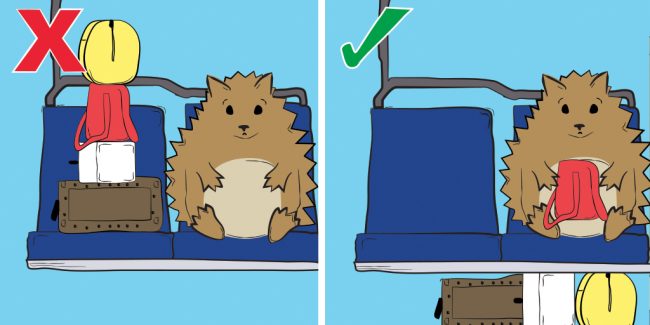 Sound Transit has a series of ads and art wraps out on Link Light Rail trains reminding passengers not to hog space in various ways.

When someone takes up two seats, either by putting their belongings on the adjoining seat (if the stuff could have fit under the seat or on their lap), or taking an inner seat next to a vacant outer seat, they probably know they are being rude. But this is happening less and less.

Blocking doorways as riders are trying to get in and out is problematic, but often a result of the train being packed, and somebody blocking the aisle leading to the center articulation zone or the stairwell to the raised end area. Stairwell blockers, consider this: Ten riders could be standing on that raised area. All too often, nobody is standing there, and the entryways are full of standing passengers. Please, let them by, or move to the end of the raised area. This stairwell blocking behavior is the equivalent of taking an inner seat, and putting one’s stuff all over ten other seats. The same thing happens on buses, resulting in riders being passed up. 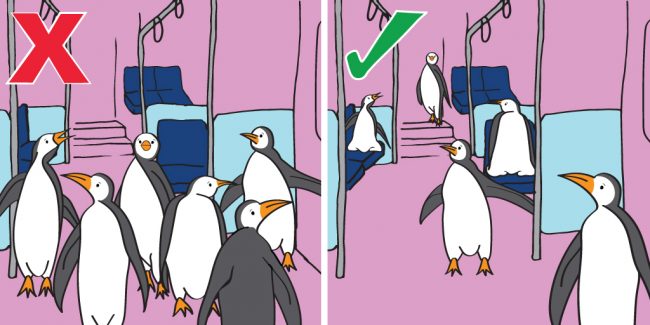 Gray added that, “We are looking into adding some marking on the platforms to encourage folks to stand aside where the doors open and give those deboarding a clear path off and away from the trains before people start boarding.”

Something else that could help in the downtown transit tunnel is moving all the buses to the front quarter of the platforms. This has already happened on the northbound side, with the elimination of Bay B and consolidation of King County Metro routes 41, 74, and 255 at Bay A. It could happen on the southbound side, now that Metro route 106 will be re-routed out of the tunnel in September. There could potentially be enough space for ST Express route 550 at Bay C, joining less-crushloaded Metro routes 101, 102, and 150. That would get route 550’s long passenger queues out of the way of those trying to deboard and board the train.

62 Replies to “Blocking the Train Stairwell is Rude x 10”