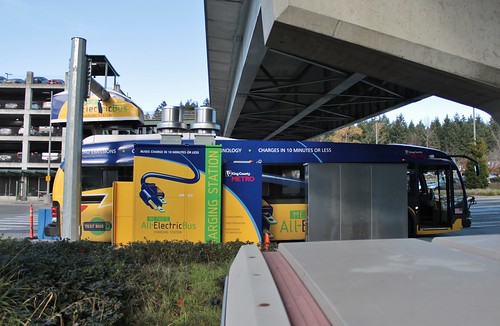 Everett Transit and Pierce Transit are the lucky recipients of federal grants to purchase new buses powered by electric batteries, similar to those operated by King County Metro on the Eastside. The Federal Transit Administration’s “Low or No Emission Vehicle Program” awarded $55 million in grants to 21 transit agencies nationwide.

Everett Transit will use its $3.4 million grant, which requires a $600,000 match from the city budget, to purchase four buses from Proterra, but will not build a fast-charging station like Metro’s at Eastgate Park and Ride in Bellevue. The new buses will replace the agency’s 4 oldest high-floor buses, dating back to 1994 and 1996, and will be used on the city’s busiest routes, including route 7 on Evergreen Way. Everett Transit cited the high cost of diesel fuel, which has now become the largest operations expense for the system, as a reason for their pursuit of the grant.

Pierce Transit, meanwhile, will only receive $2.6 million after it had requested $6.3 million. They will be able to afford only two electric buses from Proterra, as well as a fast-charging station. The agency already uses a fleet of buses powered by compressed natural gas (CNG), which are cleaner burning than traditional diesels, but the new electric buses will further reduce emissions.

Across the mountains, Link Transit in Wenatchee is also set to receive $3.8 million from the same program to purchase five buses and a fast-charging station. They already operate electric “trolley replica” buses on their frequent circulator routes in downtown Wenatchee and East Wenatchee, funded in 2010 by a different FTA grant.