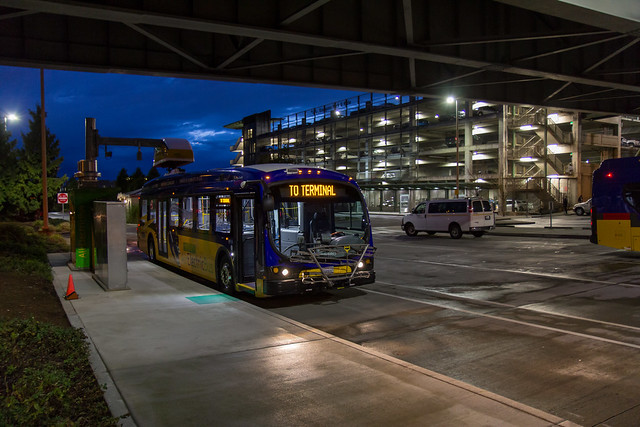 On February 17 Metro held a press event to announce that their three all-electric Proterra Catalyst battery-powered buses would be hitting the streets in revenue service that day. The buses will operate on routes 226 and 241—two routes that operate in a loop from the Eastgate Transit Center through downtown Bellevue.

Initially 4602 was entered service at Eastgate at 11:25 but it later broke down completely at Bel-Red Rd & 124 Av NE about an hour later. A diesel hybrid was brought in to replace it, and three hours later a mechanic brought out 4603 to run the rest of the trips for that run.

I rode route 241, and when it arrived at Eastgate TC it had used just 48% of its capacity after running a complete 18 mile loop of almost two hours. The layover time between these two trips is just 12 minutes. Since charging takes approximately 10 minutes and is required after every loop, this may mean that the trip will leave late if there are schedule delays on the incoming trip. Metro has not built in any additional layover padding next shakeup.

The “docking” process of the vehicle pulling in to the charger is almost completely automated; the operator simply holds the go pedal down and the bus takes care of forward acceleration. When the charge is complete, the arm automatically retracts.

The interior layout is designed to maximize seated capacity, with three seats being wedged in transversely between other rows of seats in order to make maximum use of space. The rear door is a passenger-activated plug door–the doors slide parallel to the body rather than pivoting. The rear section features a rear window and will soon be the only vehicles in the fleet to do so. 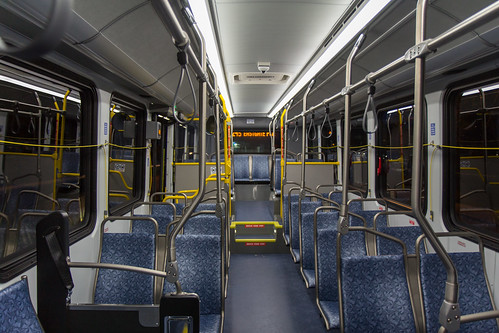 The entire interior of the bus is made of plastic (save for the seats and structural components of course) and despite this the bus was not squeaky on the inside (except for the sheet of Plexiglas near the rear door). Ride quality was neither stiff nor soft and is among the best ride quality I’ve experienced on a 40′ bus. Shifting was so smooth that only once did I question whether the bus had more than a single speed transmission (it has a 2-speed transmission, and Proterra claims this is why they have the best efficiency and acceleration of all EV buses). The whir of the electric motor wasn’t as quite as I had been expecting. Anecdotally I felt the interior volume was similar to the diesel artic I rode immediately after (sitting approximately the same distance from the engine compartment). The motor makes noise when braking—capturing energy for later reuse. While riders of a handful of Seattle routes are no strangers to having a silent bus when stopped, this is a relatively new experience for Eastside routes as only the trolleys and Metro’s newest hybrids have an engine shutoff feature.

Testing initially began last summer, and the buses have often been seen around Bellevue sans passengers but filled with water barrels to simulate a passenger load. This testing has purportedly gone well as Metro is seeking $3.3 million in additional grants to buy six more of these buses along with a second fast-charging station. Doing so would mean Metro could make this loop run solely on electric buses.

The video below has an interior view of the docking process as well as a ride along on route 241: