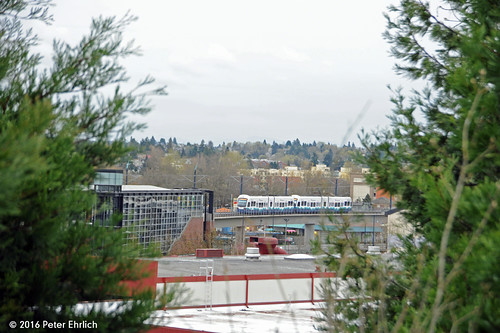 Across the region, there is a conversation going on about what the area around the new light rail stations will look like. Will cities upzone and encourage more dense development to maximize the use of the stations, or will they leave things as-is? It is helpful to look back at ST1 stations and see how upzoning affected the development around the stations. The area around Mt Baker station has some lessons for everyone as ST2 continues and ST3 gestates.

Mt. Baker has had two upzones in 15 years. The first, in 2001, was a standard rezone for a light rail station. A more recent rezone in 2014 sent potential building heights even higher.

First, let’s look at the success. Mt. Baker station borders a 2 year old mixed use building, with 56 residences and ground floor retail, with artists getting preference for leases: how Seattle is that? Mt. Baker Lofts is the type of development that transit experts advocate for when they push for Transit Oriented development. Unfortunately, that’s it for anything approaching ideal.

The big employer in the area is the UW Consolidated Laundry Facility, a 65,000 square foot facility with room for parking that launders all of the medical clothing the university uses. It’s certainly a necessary service, but hardly an ideal use of valuable space around a valuable light rail station. Everything else around the station is low rise retail. A Lowe’s, QFC, and RiteAid all have huge surface parking lots. Franklin High School is a typical Seattle high school. A few abandoned buildings and fenced off lots are sprinkled between 1 story buildings that house banks, an auto parts store, a gas station, a pawn shop, restaurant and a laundromat. The only new building under construction  is hardly mixed use: it is a underground water storage tank to help better manage Seattle’s stormwater.

The North Rainier Urban Village, particularly the area surrounding the Mt. Baker Light Rail Station, has not advanced towards the vision of the North Rainier Neighborhood Plan of 1999. Rather than a thriving town center, the station area is defined by vacant lots and auto-oriented uses and lacks a defined character and sense of place

I reached out to Steven Shain from the Seattle Office of Planning and Community Development. He explained that other south Seattle stations such as Othello and Columbia City already had a “tighter development pattern at the station” even before the light rail line came in. So the stations might have accelerated what was happening in the market anyway.   On the other hand,  Mt. Baker Station had a history of automobile oriented development and it takes a very long time for things to change. The current development pattern dates from the demise of Sick’s Stadium back in 1979 — which transformed the area from a baseball stadium and parking to the variety of businesses now there.

Shain said that many of the large parcels near the station have long term leases.e Een if the market said it is a great idea to build a 10 story building right now, it would be very expensive to break a lease to make that happen. Even then, the process of development a large project takes years. The development you are seeing now might reflect what the market was saying in 2010 or even 2005.

Why not just leave things to the market?

The Mt. Baker Station is a public investment in the Rainier Valley. By letting the station area continue to exist as it is, we’re getting a low return on the millions of dollars spent on the station and the light rail line in general. The city has spoken clearly that it wants density in the area, it just hasn’t happened yet.

How do you fix Mt. Baker Station?