In the discussions of Transit Oriented Development (TOD) at Shoreline’s future 145th Street Station, Charles Bond at The Urbanist broke the news that Sound Transit, Metro, and WSDOT have agreed to move the station north by roughly 400′, to the vicinity of NE 148th Street. As we discussed last week, the station already has much going against it in terms of access: the walkshed is bifurcated by I-5 and the accompanying interchange, the adjacent Jackson Park golf course is the epitome of transit-hostile land use, and little commercial development currently exists. If all that weren’t enough, a massive parking garage is planned. The station’s saving grace at this point is a progressive Shoreline government that is trying very hard (and may succeed) at making TOD lemonade from the lemon Sound Transit chose when it passed over superior options at 130th and/or 155th. So from this low baseline, will a move to 148th help or hurt? Well, it depends.

First, the positives. A move to the north does make the station a bit more central in any TOD plans, rather than primarily being TOD’s southwestern flank. The non-arterial grid, such as it exists, can be better prioritized for non-motorized access at 148th (especially if it meant a a new pedestrian bridge over I-5). And the three agencies seem to have agreed that the move will make the interchange rebuild easier and eliminate or reduce the complications over changes to a state drainage facility.

But the primary impetus seems to be facilitating bus-rail transfers, and here the benefits are more debatable. On one hand, if agencies are basically giving up on a people-friendly arterial on 145th, then a more separated facility with direct bus transfers may be preferable to in-line stops on NE 145th ST and 5th Ave NE.  The familiar result would be a loop-de-loop transit center similar to Mt Baker or Tukwila International Boulevard, in which all through-routed buses would incur a permanent 2-3 minute time penalty on every run.

According to Metro Deputy General Manager Victor Obeso in a statement to STB, the agency believes that increased bus volumes as outlined in Sound Transit 3 and Metro’s (soon to be adopted) Long Range Plan (LRP) necessitate the move:

To help riders make easier and safer connections, and access a transit network that better integrates buses and rail, Metro worked collaboratively with Sound Transit, WSDOT and Shoreline on the station design to modify the proposed LINK station at 145th which resulted in a slight shift to the north. The new location modifies circulation to provide a safer transfer environment by moving bus loading areas from on-street to inside the facility, so customers will be able to seamlessly make connections. This also separates bus entrances and rider drop-off areas, which reduces walking distances and increases safety.

As Sound Transit moved toward final design of the 145th Street LINK station there was recognition that several things had occurred since the planning phase which needed to be considered. These included Shoreline’s 145th Corridor Study, Metro’s Long Range Plan, Shoreline’s land use around the station and Sound Transit’s ST3 proposal.

The facility will be compatible with the proposed ST3 plan for a SR522 BRT route and has capacity for future additional Metro or ST service.

Let’s look at the planned bus service at the station. First and foremost, Sound Transit 3 includes funding for Bus Rapid Transit (BRT) on NE 145th St and SR 522 between the station and Woodinville, with 10-minute frequency to UW-Bothell and 20 minute frequency to Woodinville. As a route terminating at 148th Street Station, the slight move to the north represents a negligible travel time difference, as the bus would likely pull into the station anyway for layover.

The ‘gold’ route from Interbay (colors for illustration only) would terminate at the 148th Street Station, so the northern shift seems less of a concern. For the ‘black’ and ‘pink’ routes below, the likely result is a time-wasting loop of the transit center instead of in-line stops on 5th Ave NE, though those boarding or alighting at the northbound stop would be spared a street crossing.

Ultimately, it appears that ‘transit center’ thinking is prevailing over streamlined service, and whether or not you think that’s a good thing depends on the relative value you place on direct off-street transfers versus a bit of travel time. I tend to prefer faster travel times and in-line stops with ADA accessible pathways to/from the arterials, but less able-bodied folks have every right to feel differently. And if we fail to remake the arterials into human-friendly places anyway, the move may prove a blessing. 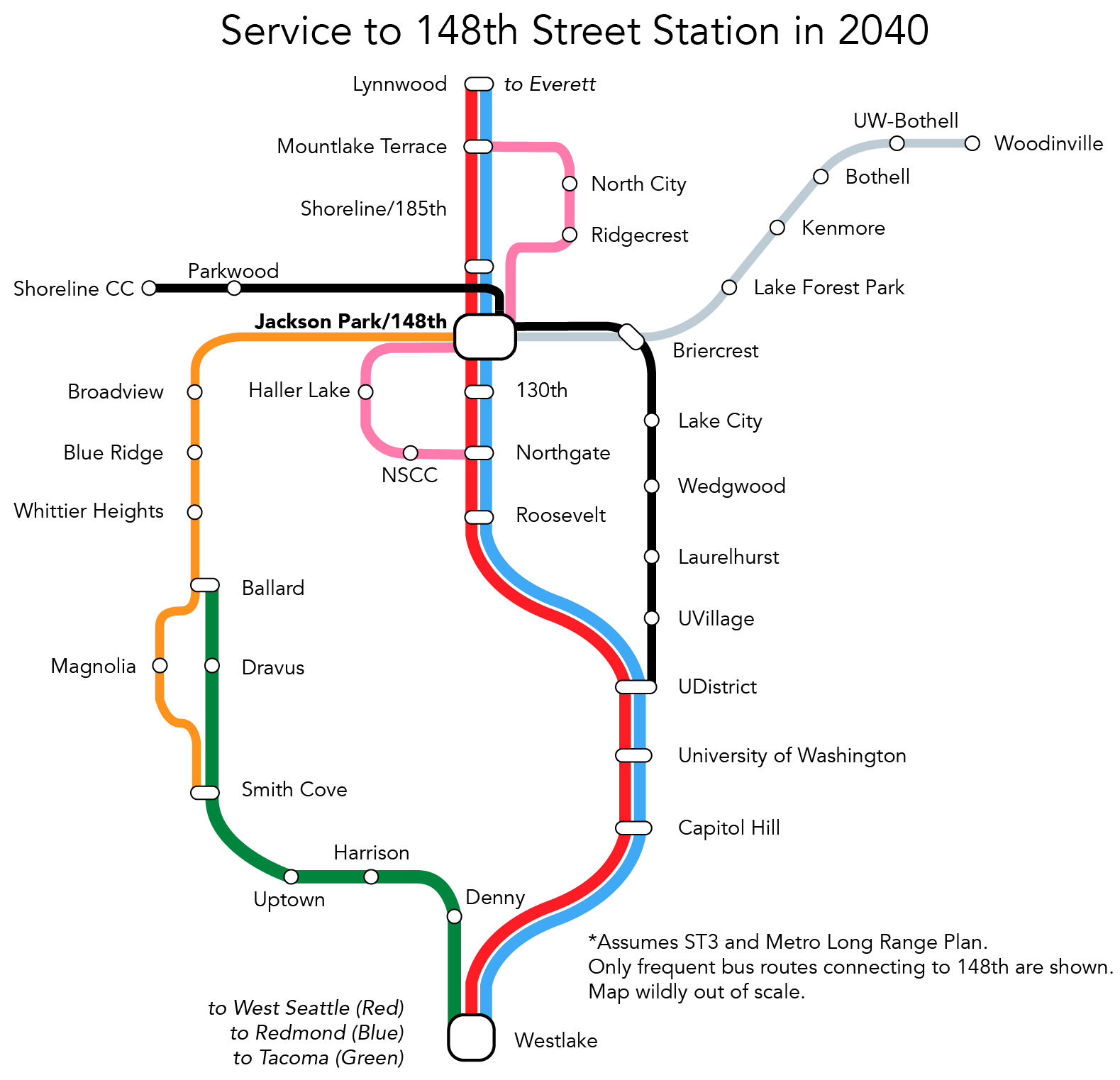