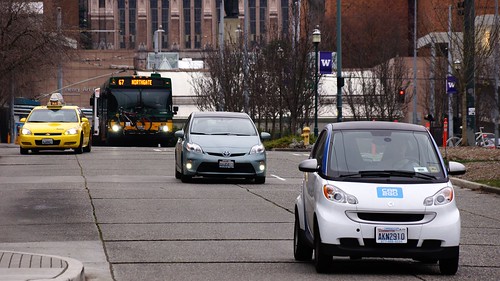 The idea that carsharing membership would reduce vehicle ownership is intuitive.  However, the overall impact on Vehicle Miles Traveled (VMT) is less obvious. While an explicit per-mile charge discourages marginal driving, carsharing can also avoid an inconvenient transit trip for travelers who would not have purchased a car, or would have been deterred by the expense of parking.

A new study by UC Berkeley’s Transportation Sustainability Research Center (TSRC) is based on Car2Go vehicle data and a customer survey. It examines these tradeoffs in five cities, in increasing order of density: San Diego, Calgary, Seattle, Washington, and Vancouver. Seattle’s results are broadly in line with the other four. The core finding is that most Car2Go users keep their cars,  and Car2Go use simply increases their driving. However, a minority sells a car (or neglects to purchase one) due to their membership, and their effect is large enough to make Car2Go’s impact a net reduction in Vehicle Miles Traveled (VMT) and Greenhouse gas emissions.

A study that determines why people are selling cars inevitably introduces the imprecision of survey data, but the finding holds up against very conservative assumptions about how much those unbought cars would have traveled. Car2Go provided trip data, and survey access to its customers. The study’s funding came from several different governments and Car2Go itself.

The study estimates that each Car2Go in the Seattle fleet leads to the sale of 3 private cars, suppression of 7 would-be car purchases, and a net reduction of between 19,000 and 59,000 miles of driving annually. (The high uncertainty is due to the difficulty of figuring the amount that a car not purchased would be driven). That comes out to between 6 and 14 metric tons of greenhouse gases per vehicle. Cumulatively, that’s between 12m and 34m miles of driving eliminated from Seattle in one year.

About 3% of Seattle’s 54,000 members sold their car, and a further 9% abandoned plans to purchase another. 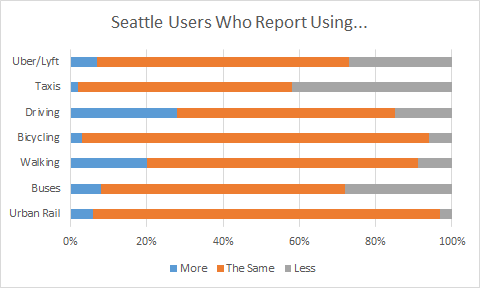 Most users reported no effect on their use of rail, buses, walking, and bikes. Only 3% of Seattle users said Car2Go made them bike more, and 6% less. Unlike the other four cities, urban rail use was more likely (6%-3%). But people that reported a change overwhelmingly said they walked more (20%-9%) and took the bus less (8%-28%).

Although this study is specifically about Car2Go, its implications for Uber and Lyft are clear. As different as their business models are, they present a similar value proposition to customers: low-cost “transportation as a service.” Although Car2Go is somewhat different by trading a lower price for lower availability, in the long run automated cars should force the business models to converge. But for the impact to be unambiguously positive in terms of congestion and pollution, it has to bring the private car ownership rate down. How much will it, beyond the Car2Go early adopters?