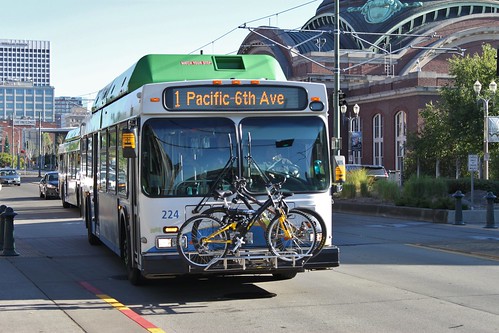 Beginning tomorrow, September 11, Pierce Transit will improve midday frequency and expand weeknight service on 13 of its routes. This is the second major expansion of the system since the Great Recession, during which the agency cut much of its service, withdrew from several cities, and failed to pass two ballot measures. Pierce Transit joins Metro, Sound Transit and Community Transit in adding service this weekend, during a coordinated region-wide schedule change.

The system’s busiest corridor, route 1 on Pacific Avenue and 6th Avenue, will see midday frequency restored to 15 minutes. Route 2, serving Lakewood and University Place, will see midday frequency boosted to 20 minutes. Route 51 will be revised to terminate in the Springbrook area of Lakewood instead of the Lakewood Sounder station. Other routes are receiving additional trips to extend service later on weeknights.

A full list of changes is available after the jump.

• Route 4: Lakewood-South Hill. Weekday evening service is extended until 9 p.m. Two trips are added from Lakewood Transit Center, and one trip is added from South Hill.

• Route 13: N 30th St. On weekdays, evening service is extended until 7 p.m. with the addition of two trips from N. 24th & Proctor, and two trips from the Tacoma Dome Station.

• Route 100:  Gig Harbor. On weekdays, schedule times are adjusted in both directions of travel.

• Route 202: 72nd St.  On Sundays, schedule times are adjusted in both directions of travel.

• Route 425:  Puyallup Connector. On weekdays, trips from the Puyallup Sounder Station are adjusted. On Saturdays, scheduled are adjusted in both directions of travel.

• Route 500: Federal Way. On Saturdays, mid-day service is increased to 30-minute frequencies with the addition of seven trips in each direction.

Additional service expansions are scheduled for March and September 2017. By the end of next year, an estimated 59,000 service hours will be restored to bring Pierce Transit over the 500,000 annual service hour mark, short of the 622,000 hours provided prior to the recession.