Wandering around Downtown Tacoma is a strange and almost eerie experience. Stately and graceful buildings adorn an intact, human scaled street grid built to serve the golden age of railways. On the east side of Pacific Avenue, the most beautiful train station in the northwest now lies in sterile use as a courthouse. Downtown is anchored on the south end by a beautifully renovated UW satellite campus, and on the north end by a derelict Italianate old city hall that is finally coming back to life. Large multifamily developments in the Stadium District speak to a more urban past, while tranquil neighborhoods such as Proctor are reminiscent of the nicest residential neighborhoods in Seattle. And its housing is the most affordable in the region.

But walking around, hardly a creature is stirring. Tacoma has roughly 1/3 the population of Seattle (200k vs 650k), but its urban core has only 5% as many jobs (14k vs 275k). Its Tacoma Link streetcar has been losing ridership steadily for a couple years now, despite being free. Pierce Transit’s service area voted against local transit service twice (in February 2011 and November 2012), leading to a contraction of the agency’s boundaries and a bloodbath of cuts that the agency is just beginning to crawl back from (Tacoma itself has repeatedly voted in favor). Its transit riders are the region’s poorest on average, and at 53%, their ORCA use is the lowest. And proving that you don’t need a War on Cars to have traffic woes, its residents suffer daily on I-5 from the Fife Curve to Joint Base Lewis McChord. 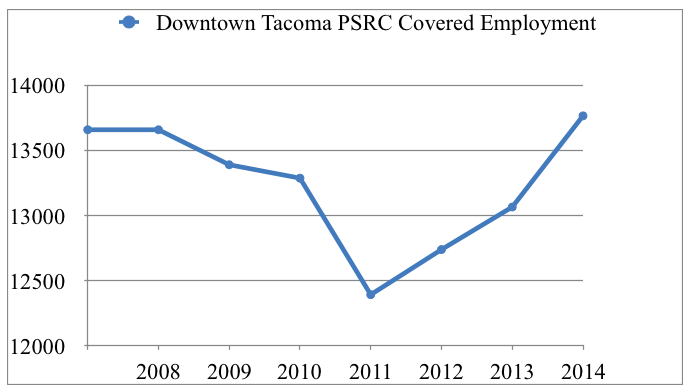 So Tacoma is a scrawny city, with good bones and a solid core, just desperate to be fed. Unlike many of the more irredeemable intermediate suburbs, Tacoma is an excellent place to direct growth. You can’t really call Tacoma a suburb; it’s more like a shadow city. If it were geographically isolated like Spokane, it would stand on its own as a regional center of employment and commerce, but caught in Seattle’s gravitational pull it continuously loses by comparison. If Seattle is DC, San Francisco, Dallas, Boston, or Chicago, Tacoma is Baltimore, Oakland, Fort Worth, Providence, or Milwaukee.

So when it comes to its transit future, it’s at least understandable that it would look without rather than within.

Like Federal Way, light rail to Tacoma isn’t really about Seattle. Current traffic between Seattle and Tacoma is occasionally terrible, but nothing like the consistent misery of those in Snohomish County. Express bus travel times routinely beat an hour, and during peak hours Sounder makes the trip in a reliable 55 minutes as well. Link to Tacoma would clock in at a reliable 69 minutes from Tacoma to Westlake, slower than buses on all but the worst days, and certainly slower than Sounder. So why is it worth it? Here are 6 reasons.

First, Link to Tacoma isn’t a bet that a high-capacity train to Seattle is needed in 2016. Rather, it’s a bet that an airport connection will be worth $2B (in 2014$) when the line opens in 2031. A majority of SeaTac Airport employees live south of the airport, and are currently only served by a half-hourly express bus that takes 45 minutes. Link would shave 10 minutes off that commute, would come at least twice as often, and would increase capacity by as much as tenfold. For a booming airport that needs its employees not to drive and park, Link expansion offers enormous capacity in a tiny footprint. And for a county whose largest employer depends on soldiers from elsewhere temporarily calling JBLM home, there’s a lot to be said for a reliable train connection for their frequent flights.

Second, if Tacoma’s downtown needs a regular influx of visitors with disposable income, conventions are a reasonable bet, and Tacoma’s leaders see a 35-minute Link ride from the Airport as a means to draw in conventioneers who wouldn’t consider Sound Transit 574 a viable option. For conventions that don’t need Seattle’s 200,000+ sq ft of space, Tacoma’s 120,000 sq ft Convention Center could be attractive and competitively priced. 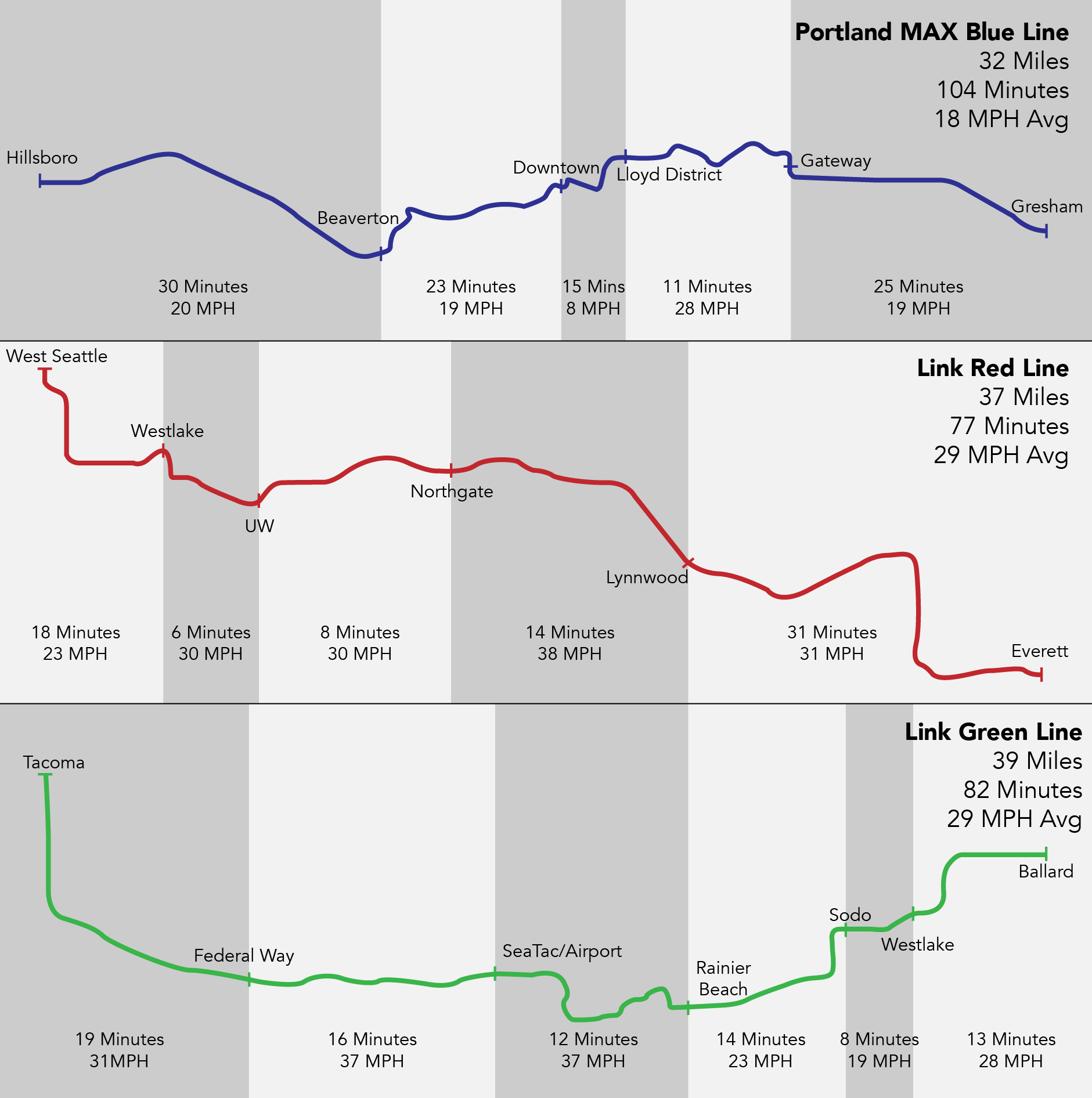 Third, frequent, all day, bi-directional service provides more value than alternative investments such as all-day Sounder. Even if the light rail connection is marginally slower, it will serve 24 stations instead of Sounder’s 9, at the cost of 14 minutes of travel time. I personally wouldn’t consider Tacoma a viable option for living if dependent on Sounder and a half-hourly 594, but I would consider it with the reliable all-day service Link would provide.

Fourth, there are a non-trivial amount of large events at the Tacoma Dome annually, including some of the largest concerts in the region. Bi-directional service until late at night will serve those types of functions very well.

Fifth, if central Tacoma hopes to regain some life as an employment center, it needs the parity that bi-directional service provides, rather than Tacoma emptying out every morning with white-collar workers headed north and green-collar soldiers headed south.

Sixth, investments in Link, Sounder, and Pierce Transit aren’t mutually exclusive.  Link would get 40% of Pierce County’s ST3 budget. Sounder would get 20%, with a number of additional trains, 10-car platforms, and an extension to Dupont (a down payment towards eventual Olympia service). Tacoma Community College would get a streetcar extension, and Pierce Transit would get Sound Transit money to turn its flagship Route 1 into Rapid Ride style Bus Rapid Transit. Lastly, Sound Transit cannot fund Pierce Transit’s (excellent) Long Range Plan, but even the most ambitious option is only $900m by 2040, roughly 11% of what ST3 would spend in Pierce County by 2040 (in YOE dollars).

It’s tempting to think that Link’s $2B could have been enough to buy all-day, hourly, bi-directional service on Sounder, and admittedly it’s an idea that should have gotten more attention during the formation of the ST3 package. But Link and Sounder would serve distinct markets that are complementary rather than competitive, and transit advocates would do well to avoid zero sum games that pit them against each other.