Sightline had an interesting report recently about displacement of older (presumably more affordable) homes by new development. They looked at 19 apartment complexes built in Seattle (all of the 8+ unit developments the King County Assessor considers as built in 2016). Those developments created 1,764 new homes while displacing only 21 older homes, a compelling 84-to-1 ratio. 12 developments on former commercial sites did not displace any older homes at all.

That’s great news, but what’s this? In Bellevue, the King County Housing Authority stepped in to buy a 76-unit apartment complex that was to be demolished for 87 town homes. Rents at Highland Village Apartments average $1,200 per month, well below the average Bellevue rent of $1,930. The KHCA spent $20 million to buy the complex, located on NE 8th St between Downtown Bellevue and Crossroads. The KHCA will now renovate the apartments, maintaining rents near their current level.

The Sightline report reminds us that development generally expands supply and is mostly good for affordability. But the story of Highland Village is hardly unique. It may be more typical in a certain kind of pricier suburban community. Highland Village look like hundreds of other older multifamily developments in this region. Two stories; on an arterial but not in downtown; surrounded by surface parking; in a low-rise neighborhood where the zoning will not permit much greater height or density (and perhaps not the market either). Rents are lower because the buildings are depreciated. Older small single family houses may get more sympathetic news coverage because they appeal to boomer nostalgia, but older multifamily units are the most affordable unsubsidized homes in most cities.

Like Highland Village, many older apartment buildings are ripe for redevelopment to higher-priced homes.

END_OF_DOCUMENT_TOKEN_TO_BE_REPLACED

In a break with tradition, Bumbershoot‘s three days span this Friday through Sunday, but not Labor Day. The monorail is staying open a little later for the crowds.

The Washington State Fair opened Friday, and runs through four weekends and three weeks, with Sounder service provided on the final two Saturdays, September 17 and 24. Advance bundles will be available again for fair admission and the Sounder round trip, but only through September 6, so plan ahead. Pierce Transit will have shuttles to the Fair from Tacoma Mall, Lakewood Towne Center, and South Hill Mall all day daily, except on Tuesdays, when the Fair is closed.

Service levels for transit agencies around the region for this Saturday through Monday are below the fold. END_OF_DOCUMENT_TOKEN_TO_BE_REPLACED

The most difficult portion of Northgate Link construction reached its conclusion Thursday, as the Tunnel Boring Machine formerly known as Brenda holed through at UW Station, completing the boring of the southbound tube from U-District Station.

Brenda was renamed TBM #1 to avoid confusion with the more plague-ridden Bertha, the world’s largest tunnel boring machine currently crawling under downtown to construct the replacement highway for the Alaskan Way Viaduct.

Travelers riding Link to or from UW Station may have noticed a lot of dust in the air down at the platform level. That’s because the freshly bored tube, and Brenda, are just north of the platform.

Update: Per Sound Transit spokesperson Kimberly Reason, the dust was all cleared by mid-day Friday.

Congratulations go to the Sound Transit engineering department, the contractors, and all the workers who pulled off this engineering feat (twin underground tubes from Westlake to Northgate, passing below the Ship Canal) and did so safely.

Congratulations also go to Brenda, the Tunnel Boring Machine that could. Enjoy your well-deserved retirement!

Frank and I will be taping soon, so if there’s a question you’d like us to answer, please leave it in the comments over the next couple of days.

It’s that time of year again!  Metro and Sound Transit service changes begin Saturday, September 10.  If you feel like this is earlier than past years, well, you’re right.  The agencies have moved to biannual service changes, in mid-March and mid-September, replacing the previous late-September timing when there were three changes each year.

The big news is Metro’s Southeast Seattle restructure, which is essentially identical to to the final proposal Metro published in May, and the first midday Sounder service.  Two weeks after the service change, Link’s Angle Lake Station will open.  Changes beyond those headline items are limited to minor tweaks, mostly improving service in the area that went through major restructures in March.  Details below the jump.

END_OF_DOCUMENT_TOKEN_TO_BE_REPLACED 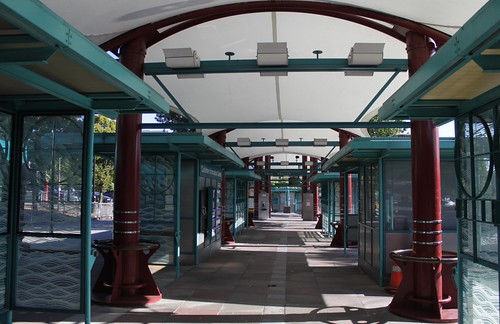 The wait ends this Saturday. At long last, Husky football is accessible to the masses by means other than buses crawling through a sea of cars and then a wall of people.

The 2016 edition of Husky football kicks off Saturday at 11 am, against the Scartlet Knights of Rutgers.

This will be the first-ever Husky football game served by Link Light Rail.

King County Metro will once again be running park & ride shuttles (the 700 series in the above map) from Eastgate Park & Ride, South 320th P&R in Federal Way, Houghton P&R, Kingsgate P&R, westbound on 100th NE by Northgate Transit Center, Shoreline P&R, S Kirkland P&R, and S Renton P&R, departing as buses fill up from 2 hours before kickoff to 1 hour before kickoff. Fare is $5 cash, round trip, or presentation of a UW Athletics season pass.

Most routes that regularly go through campus will be re-routed during game-day traffic (44, 45, 65/67, 71, 73, 75 & 271). These routes will still serve NE Campus Pkwy, from which free shuttles depart every 7-8 minutes to do a loop between the U-District and the stadium vicinity.

There will be a limited number of neighborhood shuttles on routes 44, 65, and 75, serving select stops. The stops for these routes shown on the map above are just for these shuttle trips. These will accept ORCA and charge regular Metro fare. There will no longer be a shuttle from downtown, but the light rail train is much faster anyway, getting you from Westlake Station to Husky Stadium in 6 minutes.

Whether by bus or train getting to Husky football has just gotten a whole lot easier.