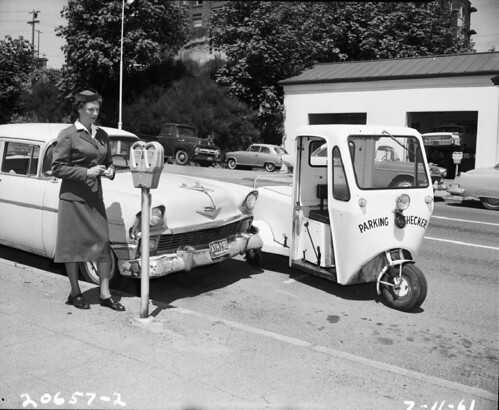 On Wednesday, the Seattle City Council passed a budget that includes a small pilot project for a parking benefit district (PBD).  The PBD pilot is the result of several years’ work by the Capitol Hill Eco District and the City Council, and were a key recommendation of the HALA report.

The pilot project is notable because it passed despite objections from SDOT.  In a memo to council, SDOT Director Kubly argued that PBDs raise equity concerns (there’s no paid parking anywhere South of Jackson Street).  He also noted that SDOT’s performance- and data-driven approach to parking management has built up trust with residents and businesses, hinting that there could be a backlash if parking funds were seen as a kind of neighborhood slush fund.   Currently, parking rates are adjusted according to demand to meet a specific vacancy rate.

Alan Durning of Sightline (a HALA committee member) published a long rebuttal to Kubly’s memo back in September.  Here’s a bit of it:

And thanks to HALA’s recommendation and city council member Tim Burgess (he’s a longtime leader on parking reform), the city council in November 2015 instructed SDOT to deliver a report that “recommends a pathway for piloting a PBD in the Capitol Hill EcoDistrict, including potential dedication of some percentage of on-street parking revenues for street, sidewalk, vehicle, and pedestrian improvements physically located within the district.”
SDOT argues that Parking Benefit Districts are legally problematic, but examination of legal restrictions on parking proceeds indicates that PBDs would be more in line with existing law than current spending practices. Parking proceeds in Washington State are legally fees, not taxes, and the body of case law that distinguishes the two implies rules for how fee revenue can be spent. In short, parking revenue must go toward purposes that are related, at least indirectly, to parking management.

I was curious about the legal restrictions, so  I spoke with Councilmember Tim Burgess, who’s been pushing for PBDs for years and was instrumental in getting the pilot project going.  Burgess’ called the SDOT letter “disappointing.”  He disputed SDOT’s characterization as of PBDs as “revenue-driven,” noting that he opposed what he considered a politically-driven (i.e. non data-based) approach by Mayor McGinn a few years back.

Burgess’ view is that the city can spend the money on anything transportation related. “That could be signage, lighting, landscaping… anything that contributes to mobility,” he said.

I’ve personally always been of the opinion that neighborhoods need to be encouraged to accept greater density with a mix of carrots and sticks.  Density generally improves quality of life, but it also comes with some unavoidable downsides, especially with respect to a resident’s ability to stash a couple of tons of glass and steel in the public right-of-way at no charge.  Yet Seattle’s process-driven politics seems generally averse to the kind of sweetening that could make the PBD medicine go down.

That said, I’m not unsympathetic to SDOT’s position.  A good chunk of the revenue would stay downtown and in Belltown, where it’s not clear there’s a huge opposition to density, and it’s true that only a few, primarily North-end neighborhoods would benefit.  And it would set a troubling precedent if every neighborhood got to keep the proceeds from activities that occurred there. Should taxes levied on Key Arena only be spent in Queen Anne?

On the other hand, slippery-slope arguments are a dime a dozen.  Plus, there are some neighborhoods that would probably benefit from some paid parking to manage on-street vacancy (Alaska Junction, Columbia City?), and this program could help make that happen.   Seattle is trying a very difficult transition form a city where the default option for most people shifts from driving your car to walking/biking/riding transit.  It’s a tough transition: residents’ perception is that things are getting worse and worse for a while until a switch flips, and then things get better and better.   More paid parking, no minimum parking requirements, dedicated transit and bike lanes: these are all levers that need to be pulled to avoid backlash as we move to a future where our ability to grow isn’t tied to car storage.

The good news is that the pilot has passed and SDOT has said they will work to make it successful.  Even better, Burgess is working to get Residential Parking Zone (RPZ) permits included as part of the program as well.  The pilot kicks off as soon as January.