Limping into the playoffs but happy to be playing at home, the Seahawks play the Detroit Lions on Saturday at 5:15pm at CenturyLink field. Sound Transit announced last night that Sounder will serve the games with a typical service of 2 trains from Lakewood, 2 from Everett, and 1 from Sumner. 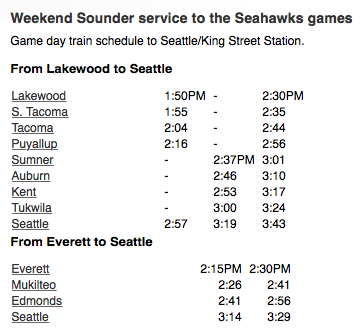 The two North Line trains will be scheduled 15 minutes apart, with 2:15 and 2:30pm departures from Everett.

All 5 trains will arrive well before kickoff during the 3:00 hour, and will depart after the game in staggered slots, with South Line trains leaving 10, 20, and 40 minutes after the final whistle, and North Line trains leaving 15 and 35 minutes afterward. Standard fares of $3.75-$5.75 apply, and unlike Metro’s cash shuttles (which will not operate) all ORCA pass products are accepted.

Even if you’re not a sportsball fan, there’s nothing stopping you from using these trains opportunistically as weekend Sounder service. One thing I like to do on days like these is take Sound Transit 578 to Puyallup, ride the Foothills Trail to South Prairie, and return in time to catch the express train back to Seattle. Any suburban folks wanting a Saturday day trip to Seattle have a tailor made 5-hour window for errands or entertainment. Just expect large, blue-green crowds :)

13 Replies to “Sounder to Run for Seahawks Playoff Game Saturday”