Skip to content
The Sound Transit Board met for its first meeting of 2017 Thursday, elected its new leadership, selected the alignment for Federal Way Link, and approved several construction contracts.

To start things off, Dave Somers (Snohomish County Executive) was elected the new board chair, while John Marchione (Mayor of Redmond) and Marilyn Strickland (Mayor of Tacoma) were elected vice chairs.

The Environmental Impact Statement phase of Federal Way Link planning, which started back in 2012, came to a close, as the board unanimously selected the alignment, profile, and station locations. 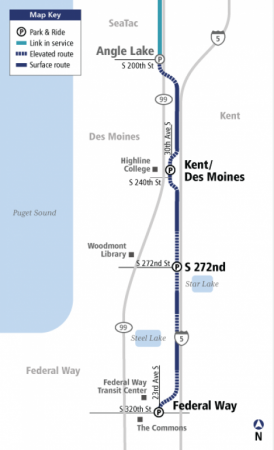 The first is along 30th Ave S in the Midway neighborhood at the boundaries of Kent and Des Moines, crossing over a new section of S 236th St, a couple blocks east of Highline Community College.

The second is just south of 272nd St and west of I-5, at the northeast corner of Federal Way, on the east edge of the Mark Twain Elementary School playfield.

The third is along 23rd Ave S, between S 317th St and S 320th St, just north of the Federal Way Commons. Tail track for that station is planned to cross over 320th, which is the major east-west arterial for the city.

In order to move forward with the elevated station over the west side of the Mark Twain Elementary School playfield, Sound Transit, Federal Way Public Schools, and King County Metro met frequently for the past month to arrive at a Memorandum of Agreement that the three entities will work together to find an alternative site on which to build a new, larger Mark Twain Elementary School. FWPS Superintendent Tammy Campbell repeated her position that light rail and a public elementary school cannot co-exist, but she and two FWPS directors expressed strong support for the MOA. The properties already mentioned as being part of the land swap were Star Lake Park & Ride (owned by Metro) and Mark Twain Elementary. Added to the list was Redondo Heights Park & Ride, at the southeast corner of S 272nd St and Highway 99, which is generally only 8-12% full. Various speakers mentioned that transit-oriented development could be part of the mix for the future of all three properties.

Two elements of the alignment came to the board without a recommendation from the Capital Committee: the grade at the 272nd St station and the grade just north of Federal Way Transit Center Station. The original preferred alignment had trenches at both. Concerns about groundwater contamination, and cost savings, led to Dow Constantine (King County Executive, and former Board Chair) making the motion for an amendment to select the elevated alternative at 272nd, and Pete von Reichbauer (King County Councilmember from Federal Way) moving the elevated alternative at Federal Way TC Station. Constantine thanked the numerous good players in the memorandum negotations, and quipped that “The MOA came together in a matter of days and weeks, surprisingly, rather than months or years.” Both amendments and the resolution for the alignment selection passed unanimously.

The Federal Way Link extension is scheduled to open in 2024.
.

The Board also approved: