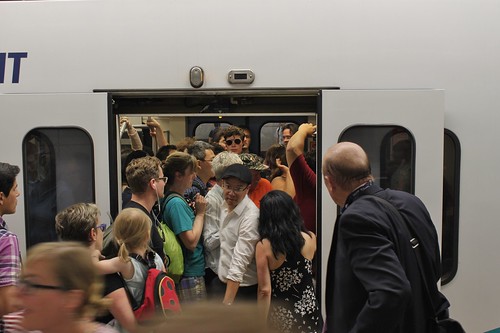 Sound Transit CEO Peter Rogoff gave us a tight range on the practical maximum number of light rail vehicles (LRVs) that can be in service at one time regularly given the current fleet, in one of his Board reports last Thursday: ST Ops was able to pull together a 17th 3-car train on Saturday, January 21, for the huge Womxn’s March, on “a moment’s notice”. So, we know 48 LRVs can be used regularly. It might even be 49 or 50. 51 is doable for special events. Neither baseball games occurring almost every other day in the summer, nor a year of the One-Center-City mashup while ST waits for its next order of LRVs to arrive in 2019 can be considered special events.

The tunnel buses are scheduled to be kicked upstairs with the September 2018 service change. As part of that service change, all SR 520 buses are proposed to cease coming downtown, and instead be diverted to UW Station. As Zach pointed out Thursday, absorbing this new ridership with the current LRV fleet may be a challenge.

A more modest version of this restructure was originally explored as part of the U-Link restructures that took effect last March. The concept has enjoyed support from this blog. Let’s take a look at how much more ridership Link will have to absorb with this restructure, and the various scenarios for how to handle it.

For purposes of this post, we are not going to talk about SR 520 exit ramp congestion, SR 520 construction, Montlake congestion, escalator breakdowns, elevator breakdowns, long transfer hikes, Husky football shuttles pushing regular buses aside, or Link Light Rail being brought to a halt for hours due to damage to the catenary. We’re just going to assume a reasonably smooth transfer between routes 252, 255, 257, 268, 311, and ST Express 545, and Link, at UW Station, and that Metro and Sound Transit will decide to go through with this restructure.

We know that even with 6-minute headway, some of the southbound trains are getting really tight. Increasing headway will only exacerbate that problem, unless there are more 3-car trains. The addition of up to 750 peak-hour passengers (on game nights) transferring at UW Station to head downtown would add ca. 75 passengers per current peak-hour train.

With 2-3 minutes expected to be removed from the scheduled time to travel through the downtown transit tunnel once the buses are kicked out forever, and another minute possibly being removed for the overly-long forced dwell time at SeaTac Airport Station, the very-best-case scenario we can expect for end-to-end travel time between UW Station and Angle Lake Station is 44 minutes.

Doing the 6-minute headway / combined 3-minute headway plan would require most of the trains in both loops to be 2-car consists. Only 4-6 trains maximum could run as 3-car consists. That might yield one extra southbound LRV to Angle Lake during the peak-hour, or it might be just like now (24-25 LRVs per hour).

The 7.5-minute/3.75-minute scenario, if it were to run with 3-car trains on the full loop and 2-car trains on the turnback loop, would still require at least 49 LRVs in service, putting it in the gray area of feasibility. It would have only as much peak-hour southbound capacity to Angle Lake Station (24 LRVs) as is currently being used.

If that really tight 4-train loop could be done in the 8/4 scenario, the deployed LRV fleet would just barely be able to run as all 3-car trains with both loops running at 8-minute headway. This scenario would actually yield less southbound capacity to Angle lake Station during the peak hour (22.5 LRVs) than what is currently being used.

None of the turnback interspersion scenarios allow for PM peak-hour ridership growth heading south from downtown, beyond currently available space on the trains.

If ST opts for the approach of just running all 3-car trains all day, and sticking with the 6-minute headway after the buses get kicked out of the tunnel, those 48 LRVs needed to do the peak loop leave nothing for turnback trips, except maybe having a 2-car train ready to send north from the SODO base at the height of peak to carry an extra 400 passengers to UW Station, and then immediately deadhead back to base.

It won’t be apparent until this summer, when the impact of the additional 2500 daily southbound trips created by the opening of Angle Lake Station last September is fully felt, to see if even 30 LRVs per hour can handle the OCC crush. But unlike the various turnback-loop scenarios, the approach of just running the full loop at 6-minute headway looks likely to be in the right ballpark for southbound ridership demand.

Now, lets look at northbound ridership impact, since that is what is being used to justify the turnback loop. Let’s assume ridership of 60 passengers per bus headed out of downtown on those 27 peak-hour buses headed northeast. That’s roughly 1600 additional peak-hour passengers for Link to carry north to UW, or 160 per current train. If you’ve been in Westlake Station during evening rush hour, you’ve probably noticed that the southbound trains are consistently more crowded than the northbound trains. The new SR 520-transfer ridership would justify adding about 10 peak LRVs northbound, before accounting for existing spaciousness. Moving to all 3-car trains running the full loop would add about 6 peak LRVs in each direction. That should be plenty. To the extent there are crushloads, having them on a train where everyone will empty out 6 minutes later seems better than having them on a train where most of the riders might be on for at least 27 minutes.

The turnback scenarios yield anywhere from 40-46 LRVs per hour per direction between UW and Stadium Station. That seems like serious overkill in the context of new ridership from UW/SR 520 transfers.

Sticking to the simple approach of just running all available trains at 6-minute headway on the full loop, there might be some passengers who can’t fit during the spike at the summit of peak. But having a few passengers occasionally wait 6 minutes for the next train to head home because everyone is heading out at 5:30 pm is a first-world problem over which I’m not going to lose any sleep.
.

New this week at Westlake: pic.twitter.com/LTC0MxBQrY

They are much farther from the platform edge than the floor arrows used in most other train stations around the world, but hopefully they will help passengers be in the right place to let deboarders get out quickly, so that boarding can happen more quickly.

32 Replies to “Can Link Fleet Handle One Center City Ambitions?”