After multiple warm winters and a few false starts during this cold one, the Seattle metro area finally got a substantial amount of snow Sunday night. Nearly a foot has fallen in places like Bonney Lake, with 2-3 inches here in Seattle. Metro is reporting numerous cancellations and serious delays throughout the system this morning, and buses are running with chains and on snow routes. Thought there is method behind the appearance of madness, riders are often left bewildered by the snow-related changes, so we thought it would be a good time to repost our Snow Route Refresher from December. Here’s the relevant section:

It’s a good time to refresh your knowledge of transit snow operations in Seattle. The first thing you should do is sign up for alerts. Metro, Sound Transit, Community Transit, Pierce Transit, and WSDOT all provide thorough information on road closures and reroutes. Being a Twitter user often gives you a leg up too; follow @seattledot, @kcmetrobus, @SoundTransit, @MyCommTrans, @PierceTransit, and @wsdot_traffic. 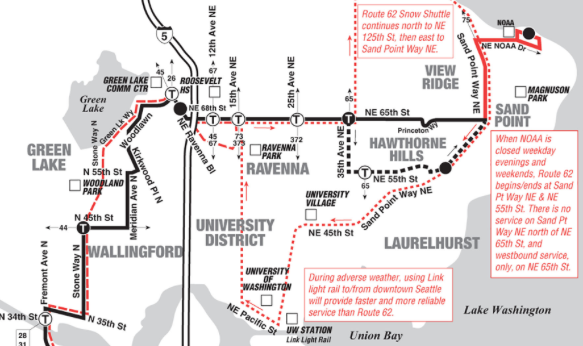 In major Seattle snow events, there are a few basic reroute principles:

In 2010’s Snowmageddon, Link was the only mode that didn’t fail, With the ULink extension, Capitol Hill and UW riders can now join the ranks of the snow-immunized.

44 Replies to “For Once, a Real Snowstorm”