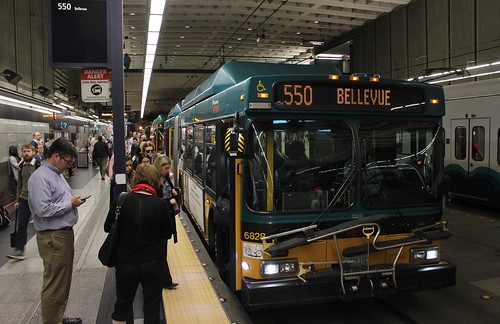 The cause of having to divert these routes is the seven bus routes (41, 74, 101, 102, 150, 255, 550) that will be kicked out of the Downtown Seattle Transit Tunnel in September of 2018 when Convention Place Station gets closed permanently for construction of the addition to the convention center.

There are several tactics to mitigate these 72 surfaced peak-hour runs without the pain of passengers from two major all-day routes and eleven peak express routes having to transfer at the edge of downtown.

If all these tactics were used, 77 peak-hour bus trips could be removed from downtown bus traffic.

Each truncation would be unpopular with some portion of riders on each route. But the OCC truncation plans (other than the SR 520 portion) appear to be much more painful.

Moreover, these truncations collectively only mitigate the surfacing of tunnel buses. There is still the matter of traffic impacts from construction of the convention center expansion, the new Colman Ferry Dock ($), the 1st Ave Streetcar, Madison Bus Rapid Transit, and that giant wormhole for a freeway under downtown. Determining these impacts is much more complicated than counting bus trips.

65 Replies to “Crunching the Numbers on Downtown’s Bus Capacity”