More people are driving into Downtown Seattle than ever, and car commuting is at its lowest rate in the modern era. Both of these statements are true. This morning Commute Seattle released its 4th biennial “Modesplit Survey” capturing commute trends in Seattle’s Center City  – see our coverage of the 2012 and 2014 surveys – and the results show the paradoxes of our growing city.

First, the bad news anyone stuck in traffic knows in their gut: there are nearly 2,300 more car commutes each weekday peak period than there were two years ago. In a system already strained for capacity, these tiny increases reduce the system’s resilience and tip it into gridlock far more often. In 2014, Downtown had 228,000 commuters and 31% of them drove alone, for 71,100 daily car commutes. This year the rate edged down (to 30%) while the volume went up (73,350), because Downtown grew to 275,000 commuters over the same period.

Looked at another way, our Center City added 45,000 jobs but only 2,300 more cars, meaning transit, walking, and biking absorbed a truly stunning 95% of new job growth. If new workers chose to drive Downtown in the same proportion as everyone else (30%), we would have seen 14,000 more cars instead. The result? Probably total chaos. 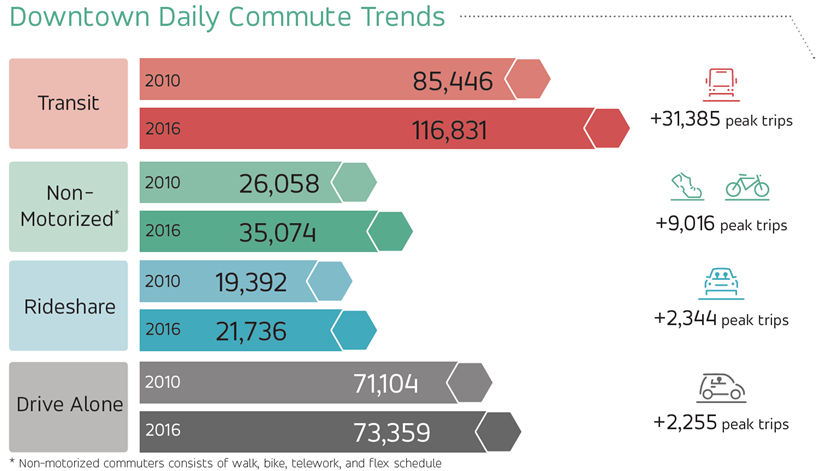 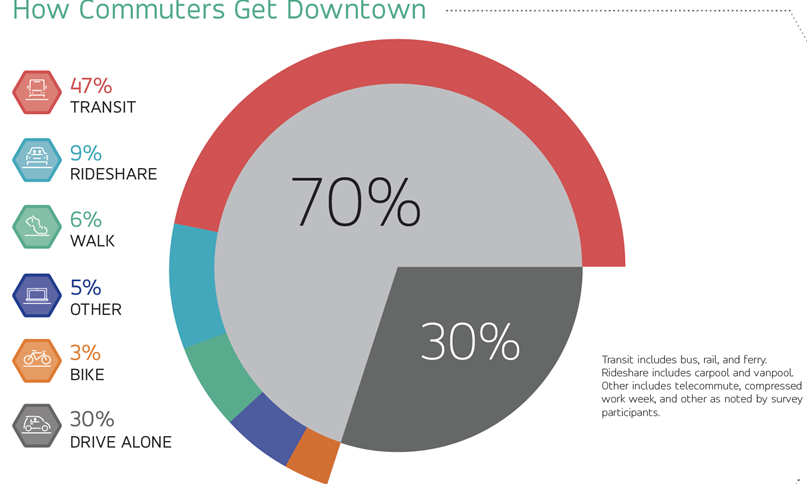 Within Downtown neighborhoods, trends were just as encouraging. The traditional Commercial Core saw its driving rate fall from 22% to 17%, and South Lake Union saw its rate fall from 46% to 38%. While driving, walking, and biking all stayed near their historic proportions, transit is what’s making the difference. Transit’s modeshare grew from 45% of 228k in 2014 to 47% of 275k, which represents 37% growth of transit ridership in just two years.

This leads me to two conclusions. First and foremost, praise is due to our transit agencies for improving service and delivering exciting new products such as University Link. Praise is due to SDOT for stepping in and greatly boosting service within the city, and praise is due to voters for approving it. Praise is due to Seattle’s progressive business community, including the Downtown Seattle Association, who partially funds Commute Seattle and who heavily backed ST3*. Praise is also due to the hundreds of companies paying for transit passes, installing bike amenities, and implementing other transit-friendly policies. Many of our peer cities are falling behind, even those building lots of shiny trains, but Seattle is leading the way.

Second, in this context of rapid growth, it is no longer sufficient to reduce driving proportions. Because our roads don’t grow with jobs, the operating constraint is a constant. Accordingly, future goals should be strictly about reducing vehicle volume. To get there, we will need to be move further and faster away from accommodating cars. It will become progressively more unconscionable to preserve the right of the 30% to monopolize 70% of our right of way, while delaying (and sometimes shutting down) the movement of the 70% who don’t drive.

In the context of One Center City, this should translate into a framework that isn’t afraid to squeeze SOV capacity. Current draft plans place nearly all the pain on transit riders, especially in the West Seattle and I-90 corridors, and asks very little of those driving alone. SDOT and our agencies should take the political risk and recognize that serving the needs of the supermajority who don’t drive both optimizes throughput and rewards those making the least intensive use of scarce right-of-way. We should increase the carrots for those making the space-optimizing choices, and increase the sticks for those who drive.  Once a small number of people stop taking up a disproportionate share of space, we’ll see just how fallacious are our fears about our street capacity. And for those whom we depend on to drive, such as deliveries and freight and ambulances, etc, we owe them the space to move.

38 Replies to “Amidst Unprecedented Growth, Transit is Saving Downtown”