Sound Transit had the right idea when it proposed a new route, ST Express 591, from Tacoma to north downtown Seattle via the Seneca St exit from I-5, in its 2015 Service Implementation Plan (page 94).

The proposal included forcing riders from Tacoma currently riding ST Express 586 to transfer to Link Light Rail to get to UW. In light of the congestion downtown faces from 2018 to 2021, keeping route 586 for the time being makes sense.

Since the elimination of route 586 was ST’s reason for proposing route 591, route 586’s continuance after U-Link opened would explain why the awesome route 591 proposal vanished from the pages of the SIPs. 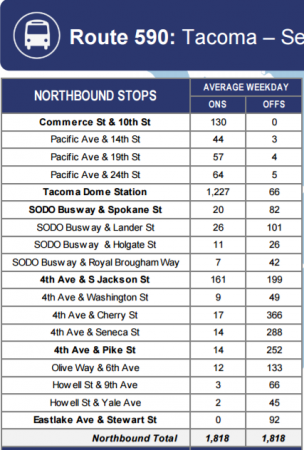 However, stop-level boarding and alighting data from the 2017 Service Implementation Plan (See page 221) gives strong justification not only for route 591, but also giving such a new route the majority of service on the Tacoma-Seattle bus corridor. Add two more Sounder round trips coming in September, and it should be clear that route 591 ought to be the dominant peak bus path between Tacoma and Seattle. Throw in having route 591 continue into South Lake Union to take advantage of the new transit lanes (as is proposed for route 592 — See the solid teal line in the map at the top of the post), and some organic lemonade could be made out of the One Center City restructure proposals.

The Potential Service Interventions (page 20) being discussed by the One Center City Advisory Group include the possibility of truncating route 590 at International District / Chinatown Station. Having route 590 truncated at ID/CS would have hundreds of riders transferring there daily to get across downtown, on buses and trains already packed to the gills. However, if Tacoma-Seattle service were split into routes 590 and 591, riders coming from Tacoma would be able to get relatively direct service to whichever part of downtown they are headed toward. Such a proposal would make a lot more sense than truncating all route 590 service or all route 550 service (page 17) at ID/CS.