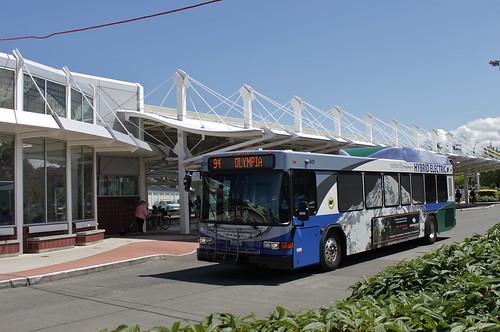 A pair of bills would give Thurston County’s Intercity Transit (IT) the authority to go to the voters and ask for an additional 0.3% sales tax authority. The current IT tax rate is 0.8%, out of 0.9% authorized by the state. Sales tax provides 3/4 of IT’s revenue stream. Ridership has grown 68% in the past 10 year. IT raised fares roughly 25% back in 2013.

All Public Transportation Benefit Areas in the state are authorized to have a sales tax of up to 0.9%, with voter approval, except for Snohomish County Community Transit, which is permitted a 1.2% sales tax.

The Central Puget Sound Regional Transit Authority, which is not a PTBA, will have a 1.4% sales tax rate effective April 1, 2017.

The City of Seattle devotes a 0.1% sales tax to extra bus service.

The bill passed out of the Senate Rules Committee on Wednesday, and sits on the second reading floor calendar.

That bill had to first go through the House Finance Committee, where it got forwarded 7-2-1 on February 3, to the House Transportation Committee.

The deadline for HB 1410 to get a public hearing and voted out of the House Transportation Committee is Friday, February 24. Nobody testified against the bills at either of the first two hearings.