The media are full of stories of people mad about car tabs. Even though voters just approved them, and ST is applying them in accordance with existing law, there is no shortage of people that never wanted to pay higher taxes for transit in the first place. Olympia is anxious to respond, partly because their electorate is considerably more conservative. Also, a future revenue reduction is offset against “spending”, rather than any particular project or bus route that people care about.

In response to legislative staff inquiries, Sound Transit staff have finally produced an initial estimate of the impact. Unfortunately, it’s too vague to make the connection to real projects that would successfully counter the rhetoric. Nevertheless, we get a sense of the scale of the problem.

There are a lot of bills out there, so the memo covers a few different possibilities.

The most extreme case is “defeasance”, which is the technical term for, in effect, replacing the existing stock of bonds with a new set of bonds tied to the alternate, 2006 car valuation system.* This would immediately eliminate the 0.3% MVET from Sound Transit 1, because the legislation related to I-776 would apply once the bonds are gone. Borrowing costs would likely rise. ST assesses the overall revenue reduction as more than $6 billion. 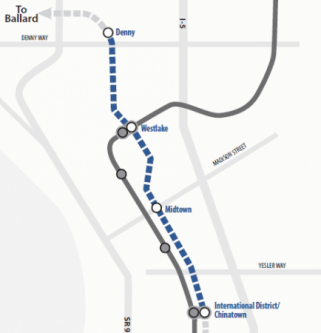 As longtime readers know, in a long project it’s hard to know how much $6 billion is without knowing what year suffers those costs. The memo isn’t particularly clear on that point. But it’s about 11% of the entire $54 billion project budget. To get a sense of the limits, the whole segment from Ballard to Chinatown is $4.4 billion in 2014 dollars. In dollars from the opening year of 2035, that’s $6.6 billion assuming 2% inflation. So $6 billion is Ballard-Chinatown money, roughly speaking.

A more moderate legal outcome would require using the 2006 valuation system on all future bonds. The memo expects higher borrowing costs without being specific at all.

Finally, a 40% rebate for low-income households would not impair the bonds at all. ST has asked Seattle for the financial models from the city’s rebate and does not have more details at this time. But the memo seems particularly optimistic about this option.

Except for the draconian defeasance scenario, we still don’t have good impact estimates. Ultimately, though, Sound Transit has significant project risk buffers, and cutting ST’s revenue increases risk rather than immediately canceling projects. Of course, if there’s a time in the next 25 years where that added risk threatens project delivery, the same people who were so eager to hack at the taxes will be the first to condemn Sound Transit’s “mismanagement.” They certainly won’t take responsibility for their own recklessness.

* I was tempted to call the 2006 Kelley Blue Book system the “lower valuation” system, but as the memo points out “Owners of vehicles that are less than 11 years old would receive lower bills under the 2006 depreciation schedule while owners of vehicles older than 11 years old would receive higher bills.” Yes, Olympia’s strike for the common man would make the MVET less progressive.