As part of the One Center City process, Metro and Sound Transit are currently seeking feedback and convening a Sounding Board for proposals to restructure  SR 520 service to UW Station, with survey submissions due Sunday, April 2.

The SR 520 process is farther along because it already had a trial run during the initial ULink Connections outreach process in 2015. But though the near-term pain is far more acute in the I-90 corridor, outreach there has been far less extensive. Sometime this year, South Bellevue Park and Ride will close for 5 years. Just 2 months from now, unless Mercer Island successfully delays it through litigation, the express lanes will close for East Link construction and I-90 bus service will use the general roadway (albeit in new HOV lanes) for the next 6 years.

We’ve heard that the current proposal for I-90 – proposing to truncate Route 550 at International District Station while leaving other I-90 services relatively untouched – has been unpopular. So here’s a proposal: kill the 550, or reroute it over SR 520.

[Action Alert: regardless of what you think of the following proposal, if you want to see I-90 service considered as part of the SR 520 restructure process, get your comments in TODAY, and/or send your comments to King County Councilmember, Sound Transit Boardmember, and Bellevue Resident Claudia Balducci.]

Route 550 is a short, simple, high-performing route (page 170). It boasts 11,000 weekday boardings, with 4,700 on Saturdays and 3,000 on Sundays. It serves the core markets of Downtown Bellevue and Downtown Seattle, with just two intermediate markets, South Bellevue and Mercer Island. In the peak direction, with service every 5 minutes and roughly 90 boardings per trip, the route carries 1,100 people per hour to/from Seattle. All-day, bi-directional demand is strong.

But since its intermediate markets – South Bellevue and Mercer Island – are being so disrupted by East Link construction, the route will become much more about its endpoints. Once you’re talking about the best way to service the Downtown Bellevue-Downtown Seattle markets, SR 520 becomes a much more attractive option.

Pathway Length: all 3 possible pathways are equivalent in length, so we’re not talking about anyone detouring out of their way. Bellevue Transit Center to Westlake is 11.4 miles via SR 520, 11.5 via SR 520 and Link, and 11.7 via I-90. 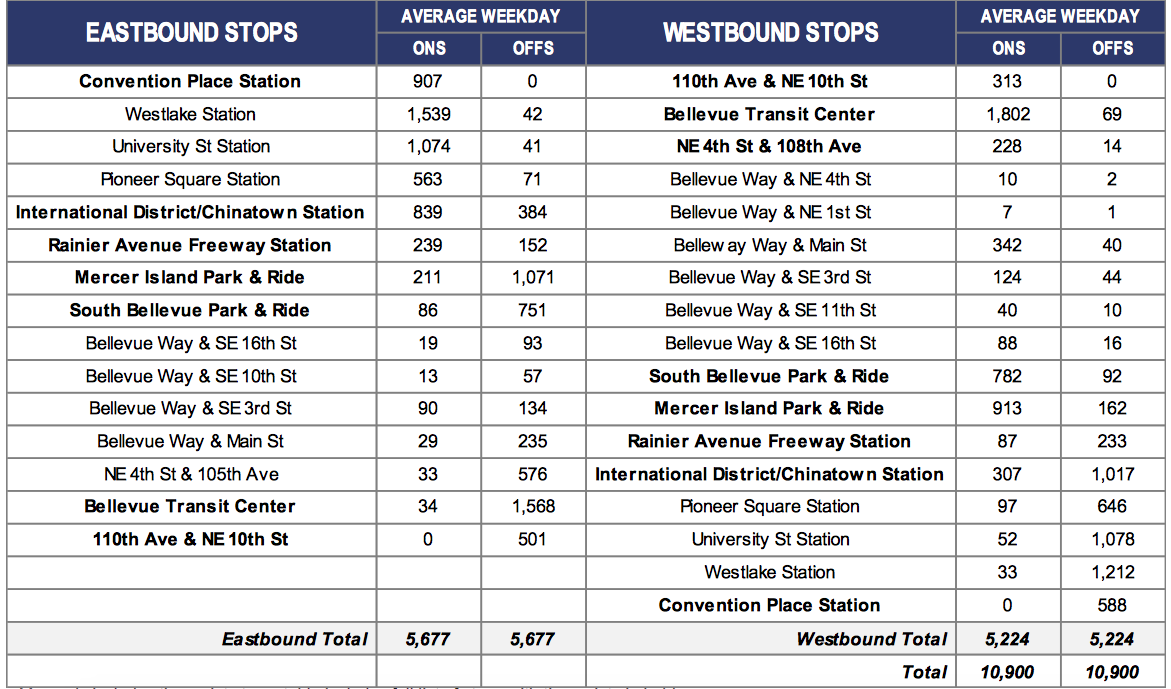 Options for a 550 Restructure

What do you think?