King County Metro and Sound Transit have begun an outreach process to transit riders in the SR 520 corridor. Transit users and community members are invited to take a survey, running through April 2. Town halls will be held at University of Washington, in Redmond, and in Kirkland.  This will be the first of several opportunities for public input planned as service proposals evolve.

Candidate routes for truncation at UW serve Kirkland, Redmond and Woodinville. A final proposal is also expected to include more frequent service on many routes, along with more service earlier or later or on weekends. New service between the Eastside and South Lake Union will be considered.

The immediate impetus for service changes on SR 520 relates to several construction projects in central Seattle including the anticipated closure of the bus tunnel and Convention Place Station by the end of 2018. Absent other changes, bus performance through downtown will be slowed significantly. The One Center City proposal truncates many bus routes at rail stations outside of the downtown core. Some of the changes are temporary remedies until Link extensions to Northgate and Bellevue are open.

On the other hand, changes to SR 520 bus service offer permanent benefits to riders if executed well. Rail to downtown is faster and more reliable than buses on I-5 and surface streets. The service hour savings can be redeployed to more frequent service on Eastside buses or service to more places. But understandable concerns about the efficiency of bus to rail transfers at UW remain.

Metro and Sound Transit previously considered options for restructuring SR 520 bus service in the first phase of the University Link Connections process. That was shelved in favor of a more focused process with Eastside communities once Link to UW was open. Since then, Sound Transit has added service to UW station via ST 541 from Overlake and ST 542 from Redmond. Earlier this year, the County Council approved Metro’s Long Range Plan with most SR 520 buses reoriented to serve UW. The success of the U-Link restructure has surely made agencies more optimistic about the prospects for improved service on SR 520 via UW.

Metro and Sound Transit are also soliciting applications for a Sounding Board that will meet regularly through the year and delve into the details of proposed changes. Applications are due April 2. 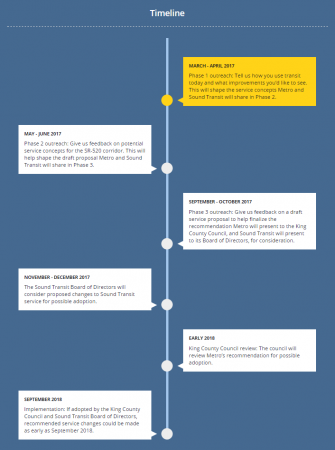