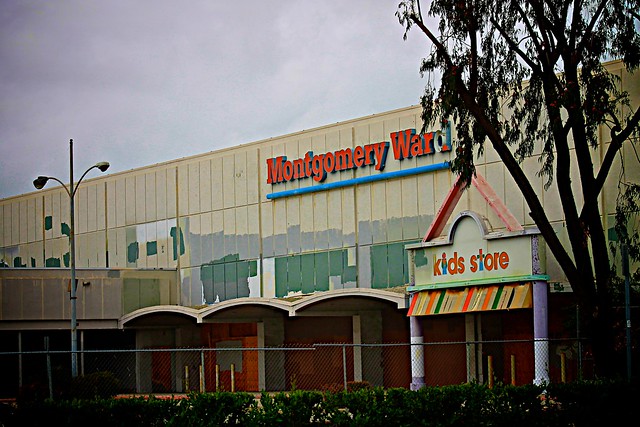 Per the New York Times, the end of retail is nigh:

E-commerce players, led by the industry giant Amazon, have made it so easy and fast for people to shop online that traditional retailers, shackled by fading real estate and a culture of selling in stores, are struggling to compete. This shift has been building gradually for years. But economists, retail workers and real estate investors say it appears that it has sped up in recent months.

More workers in general merchandise stores have been laid off since October, about 89,000 Americans. That is more than all of the people employed in the United States coal industry, which President Trump championed during the campaign as a prime example of the workers who have been left behind in the economic recovery.

We’ve been reading about the death of retail and shopping malls for years now, but the trend does seem to be accelerating.  The trend is especially pronounced in the suburbs, where some are projecting a retail apocalypse as consumers shift their shopping spend to Amazon and other e-commerce outfits.

If there’s a silver lining (other than to Amazon’s bottom line), it’s that suburban malls present great opportunities for infill development.  For a region like ours with an acute housing shortage, the end of the shopping mall era could be a blessing in disguise. It’s politically easier to raze a mall and build dense housing than it is to displace a whole bunch of single-family houses.

Whatever the flaws of the Puget Sound’s suburban-oriented light rail, it will go past a fair number of malls: Northgate and Alderwood Malls will have adjacent stations, as will Federal Way, Factoria, Bellevue, and Redmond.  Everett Mall is somewhat close to a future station.  Tacoma Mall, Southcenter and Totem Lake could be candidates for extensions in ST4.  That’s 10 transit-adjacent malls with a combined 619 acres of  land (only counting the malls and their parking lots and ignoring the surrounding properties, which are also potentially ripe for redevelopment).  Combined, that’s roughly the size of Downtown Seattle (bounded by Jackson, Denny, and I-5).

Of course, some regional malls seem rather unlikely to collapse in the immediate future.  Bellevue in particular has smartly followed the trends and added upscale dining and entertainment to stay viable.  But the trend is clear. The days of a few “anchor” department stores sustaining a forgettable collection of small, interchangeable chain stores are ending.   These spaces could – and should! – be redeveloped into dense, transit-oriented housing over the coming decades.

117 Replies to “Tear Down the Malls, Build Housing”