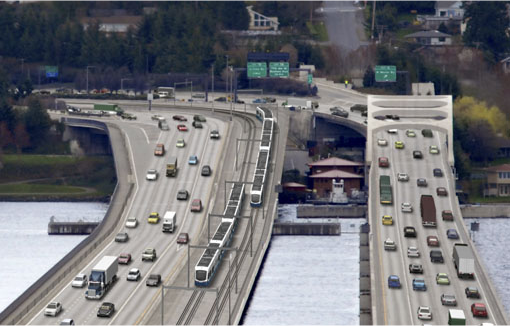 After about a decade of planning, legislative showdowns, and lawsuits, two-way HOV operations (R8A)* are to begin on Sunday, June 4th. WSDOT expects delays the first Monday, as people learn about the new configuration. A significant opening in its own right, two-way operations are an omen of even greater changes to commutes in the corridor, and to the way that transit advocates think about I-90.

For years, HOVs (and any vehicles from Mercer Island) have used the 2 express lanes in the peak direction between Seattle and Mercer Island. Only east of Mercer Island were there more traditional HOV left-lanes, allowing buses in either direction to bypass some traffic. This works great for the stream of morning express buses into downtown Seattle. But anyone trying to commute out of Seattle by bus or HOV** would spend time mired in general traffic. Worse, in the afternoon westbound there would be a difficult merge into general traffic on Mercer Island.

The reverse-peak commute is indisputably better beginning next week. With peak-direction HOV capacity dropping from two (express) lanes to one, the impact on those commutes depends on how well WSDOT manages demand by adjusting HOV thresholds and introducing tolls. Based on experience on other highways, the long-term prospects are not great.

For transit advocates, however, the long-term prospects are largely irrelevant: at the end of this project, Sound Transit has replaced the capacity it is claiming for light rail tracks, and East Link construction can begin in earnest. Bus traffic between Mercer Island and Seattle will one day be no more than a trickle, and WSDOT’s successes and failures will have little impact on transit commutes in the corridor.***

*The configuration opening on Sunday is named “R8A” for the option that represented it in alternatives analysis. In sufficiently wonky circles, the name stuck for reasons that are not entirely clear. However the blame may lay not a million miles from this website.

** I did this for five years, and fantasized about this day. In a way typical of long-lived transit projects, I have long since moved on from that work site and job.

*** Though if buses terminate on Mercer Island, HOV lane congestion will still matter.

35 Replies to “Two-Way Transit Priority Opening on I-90”