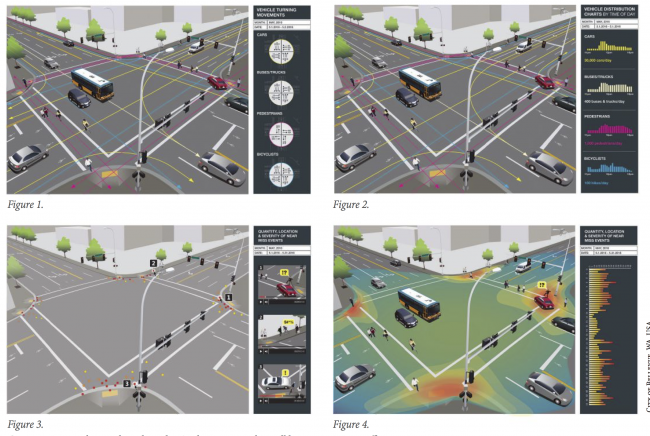 Bellevue has a new ally in the battle to reduce pedestrian fatalities to zero: big data.  The city, along with Seattle and several others, are piloting new a program that uses machine learning to proactively improve bike and pedestrian safety.  The hope is that the machines, trained by a crowdsourced group of humans to recognize bikes and people, can figure out where crashes are likely to occur.

Today, planners often wait for a crash to occur before attempting to make it safer.  For example, the Rainier Ave road safety project started after it became clear that the road had an above-normal accident rate.  To achieve the Vision Zero goal will require looking not just at intersections with high collision rates, but also places where near-collisions occur frequently.

“Traffic engineers tend to be reactive,” Franz Loewenherz, Principal Transportation Planner for the City of Bellevue told me recently.  “But we don’t need to wait for crashes to occur.”  Loewenherz and other engineers are applying the idea of the “near miss”–  which is used in other industries as a safety measurement — to the urban environment.  The goal, described in this ITE Journal Article, is to shift from a reactive posture to a proactive one.

So how do you catalog a near miss?  Here’s how it works: video data from traffic cameras is fed into a cloud-based software service, in this case powered by Microsoft, a partner in the pilot project, where it’s analyzed by computers and a model is produced of how many near misses and close calls happen between bikes, pedestrians, and cars.  The software can then identify problematic intersections for the traffic engineers to fix.

Once the fix is in place, engineers can study its effectiveness.  “Was the PBL effective? Did near misses drop and bike volumes increase?  We can then share that with other institutions. ” Loewenherz told me.

The catch?  They need to train the machines to identify pedestrians and cyclists.  Cars are regular in shape and easy to identify.  But the computer doesn’t always know what to do with, say, a recumbent bicycle.  To fix this, they are opening up the program for volunteers to come in and help train the network.

This work is part of a multi-city, multi-organizational partnership called Video Analytics Towards Vision Zero. The partnership invites public participation in the next project milestone – using crowdsourcing to analyze video and teach computers to identify a person in a wheelchair, on a bike or in a car, as well as patterns of movement in intersections. The more volunteers who take part, the better computers will learn to recognize near-miss collisions.

If you want learn more, or to help teach the system how to identify bikes and peds, visit the program website.