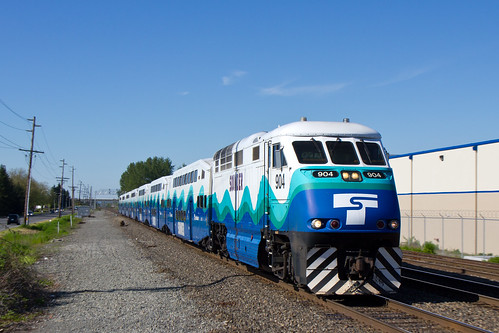 When Sound Transit put together their plan last year, more South Sounder service was an important component of building a winning coalition. However, the number of train trips purchased for a certain amount of money is subject to negotiations with BNSF. Last spring, ST exec Ric Ilgenfritz was optimistic that there would be more specifics to share with the public before the election.

That was not to be. “We pursued a path to have specifics in ST3 vetted with BNSF, but it wasn’t feasible to complete because BNSF has been clear that additional service will require capital projects,” said ST spokesman Geoff Patrick. “There hasn’t been intensive work” on this issue since they abandoned hope of an early agreement.

So what are the next steps for South Sounder? First, this September will see a ninth peak round trip and third reverse-peak round trip, the last of the ST2 trips.  The published plan says no more than that new trips will roll out between 2024 and 2036. (!) In this period, the first priority in the South Sound will be Link because “in public involvement, Link was the greatest focal point” and the Board allocated early resources accordingly, with Link reaching the Tacoma Dome in 2030.

However, ST will hire consultants, probably in the next year, to formulate a strategy for engaging BNSF. It’s hard to say what the timetable is for reaching an agreement without that strategy in place. The extension to Dupont is firmly planned to open in 2036. Patrick says the third piece of the plan — extending platforms to accommodate longer trains — may move around as needed to accommodate whatever timetable is feasible to add trips.

The negotiation process is not simply a bid on how much money to hand over to BNSF. Instead, ST is offering to make capital improvements, in particular segments of adjacent track, to allow additional runs without undue impacts to BNSF freight operations.