This is the first year of the City of Seattle’s new Democracy Voucher program, created by the City and passed in a 2015 referendum. 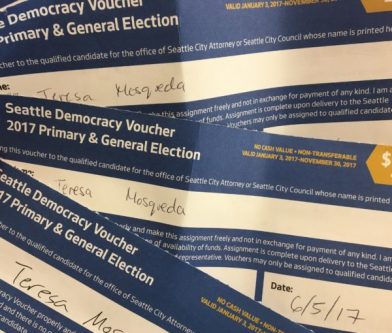 You should have received in the mail four vouchers, each worth $25 to a recipient candidate.

You can give as many of your vouchers as you want to each eligible candidate, including giving all four to one candidate, which may make a lot of sense this year.

Only city council candidates and city attorney candidates are eligible to receive democracy vouchers this year. The mayor’s race will be covered by the program starting in 2021. There are two council races on the ballot, in which STB has endorsed Teresa Mosqueda and Lorena González. González is widely expected to win easily. Mosqueda is in a very competitive contest.

Mosqueda’s website gives an address to which you can mail your democracy vouchers.

Answers to questions such as how to request replacement vouchers are available at the City’s website.

The primary election is Tuesday, August 1. You should have received your ballot by now. Drop boxes are open 24/7 until 8 pm on election day at many locations. If you send your ballot through the US Postal Service, be sure to affix first-class postage worth at least 49 cents. Accessible voting centers (open to all voters) are open at various locations during limited hours.

STB has also endorsed Jessyn Farrell for Mayor and made endorsements in various other races.

9 Replies to “Have You Used Your Democracy Vouchers?”